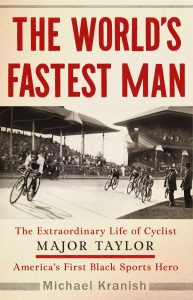 Tickets for the Nov. 2 Induction Ceremony are $60.00 each and they are available for purchase online by visiting: https://squareup.com/market/us-bicycling-hall-of-fame. The event includes a dessert reception with beverages including wine and beer.

Reporter and author Michael Kranish will be featured as the keynote speaker along with the inductees who will be announced later in August. Kranish is the author of the new book The World’s Fastest Man: The Extraordinary Life of Cyclist Major Taylor, America’s First Black Sports Hero which tells the story Marshall “Major” Taylor, the black man who broke racial barriers by becoming the world’s fastest and most famous bicyclist at the height of the Jim Crow era. Taylor was inducted into the Bicycling Hall of Fame in 1989.

The 2019 Hall of Fame Inductees will be enshrined in the following categories:

Contributor to the Sport
The 2019 Inductee names will be released in August 2019.

For more information about the 2019 inductees and the U.S. Bicycling Hall of Fame, visit: https://usbhof.org