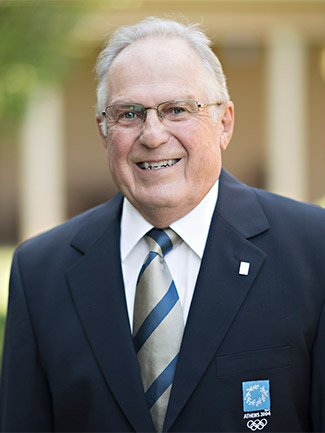 Andy Taus is a lifetime resident of Allentown, PA. He began his cycling career as an active racer spanning the years 1968 through 1974. Andy was instrumental in the development of the current Trexlertown Velodrome, working with Bob Rodale. From that, he gained his first officials license and has the honor of beginning that career under the tutelage of the late and legendary Hale of Famer, Artie Greenberg. Andy’s official capacity grew to include becoming a Grade A National Commissaire (the global word for cycling official) to Grade A International Cycling Union (UCI) Commissaire in 1990. During his career Andy has been the either the president of the international commissaire panel or been a key member of the commissaires’ panel at the world’s most prestigious cycling events such as World Track Championships, Olympic Games, Pan American and Good Will Games and nearly all of the USA’s most important events during the last 33 years. He served as Technical Director of USPRO writing and adapting all regulations and assigning all officials for USA professional cycling. Andy continues to officiate, promote races, advising and organizing for cycling events around the world.
Tom Schuler →
We use cookies on our website to give you the most relevant experience by remembering your preferences and repeat visits. By continuing to use this site or by clicking “Accept”, you consent to the use of ALL cookies. Privacy and Cookie Policy
Accept All Cookie Settings
Manage consent