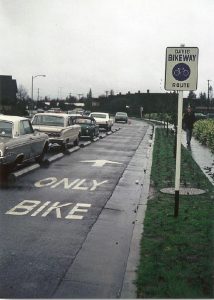 The first bicycle lanes in Davis were created in 1967.

This inquiry set, developed with the California History-Social Science Project and the California Historical Society, can be used to explore how people use different types of transportation like biking to make their city a more environmentally sustainable space. The process of city and town governments and councils are also discussed in order to explain how such city planning to accommodate cyclists and their commutes is deliberated to put green initiatives forward. The set’s investigative question —What does local government do? What power does the State of California have?— can be used to guide students through the photographs to understand how smaller government structures function. This source set includes a literacy activity for fourth grade students.

Have you ever wanted to know the story about how Davis became the Bicycle Capital of the United States? Listen to this podcast where Maynard Skinner is interviewed by Davis native, Spencer Bowen about the history of bicycles and bike lanes in Davis (9 minutes and 49 seconds) 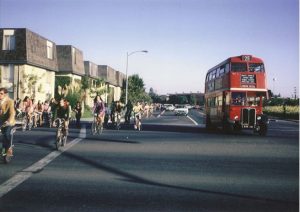