Excerpt from “Hearts of Lions: The History of American Bicycle Racing” By Peter Joffre Nye

When American Cycling Was Disney Land

“The past is never dead. It isn’t even past.” 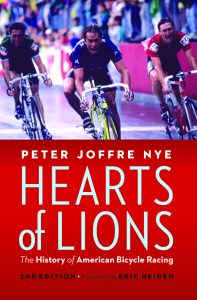 Like musicians endowed with perfect pitch and math whizzes mastering calculus without breaking a sweat, match sprinters live in a rarified milieu. Much remains to polish natural gifts. Even more, the art of winning involves an edgy mix of physical strength, intuition, and audacity. The difference between the almost right move that loses and the right move that wins looms as large as what Mark Twain described as the difference between lightning bug and lightning.

When Marty Nothstein defeated brawny Australian national champion Darryn Hill in the 1994 elite match sprint on the track at the World championships in Palermo, Italy, Nothstein fans rejoiced at the Lehigh County Velodrome in Pennsylvania, near his hometown. Journalists consulted record books. Eighty-two years had passed since Frank Kramer and Donald McDougall had won Worlds match sprints—Kramer as pro, McDougall as amateur.

Nothstein (pronounced NOTE-stine, rhymes with gold mine) followed three sprinters who had turned to coaching. Each imparted lessons, refinements, and ideas and held his successor on a bike to push him from start lines.

This succession spanned the 20

Disney stood 5 feet 8, weighed 160 in his prime, and had thick dark hair, clipped in a crew cut. After high school graduation in 1948 he worked as a draftsman and, on his own time, speed-skated on indoor rinks trendy in southern California. A fellow skater loaned him a Red Devil bicycle for a three-mile contest hosted by the Pasadena Bike Club around the Rose Bowl Stadium.

“I was into boxing and wore boxing shorts,” he recalled. “The club president told me to just get in front of everybody and when someone comes up, to wind it up faster. So I did that and won my first race.”

In 1949 he finished second in the Amateur Bicycle League of America (predecessor to USA Cycling) state championship. He qualified for the ABLA nationals in San Diego, a weekend series of four events. “They were on a high school quarter-mile dirt track. There were a lot of crashes because the turns had no banking and riders ganged together around turns. In my heat, I was leading and crashed, landing on my head. The doctor said I had a concussion. I went home.”

Disney didn’t ride for four years. He served two years in the Army and married his fiancée, Alice. They had a daughter, Jacqueline. He resumed racing in 1954, under the guidance of Albert (Musty) Crebs. In 1911 on the board velodrome in Salt Lake City, Crebs bulleted one lap around the oval and set the world record for one-sixth of a mile (293 yards). A native of

Jersey City, New Jersey, Crebs lived the itinerant life of a professional cyclist and settled in Long Beach, outside L.A., in 1945. He operated a tiny bike shop, repaired push lawnmowers, and sharpened blades.

He also coached locals. They called themselves the Crebs Wheelmen. Among them were 1932 Olympian Russell Allen, 1936 Olympian Charles Morton, and Don Hester, 1946 ABLA national champion.

“Musty was a nice person,” Disney said. “He got the nickname because he rode scrunched up on the bike. There were twenty or more of us in the Crebs Wheelmen club. We got together on Sunday mornings in Long Beach when the weather was good. We rode straight half-mile stretches, sprinting to the end, then turned around and did the same back. We did that six times. Musty kept score about who finished first, second, and third.”

Disney said Crebs had mystique for his uncanny way of straightening steel frames that lost alignment after a crash. Riders took their bent frames to his shop. “He took the frame, told the customer to wait, and disappeared in the back. After a while he returned with the frame, all fixed. Customers wondered what he did when he disappeared with their frame. One day a rider took his damaged frame to Crebs while a buddy waited out back to see where Crebs went. Crebs walked out the rear door, stepped over to a tree, and put the frame into the crook of a limb, bent it this way and that, eyeballing the frame till he got it right.”

The old pro shared a trade secret: winning was less about strength and more about timing. He came from the tradition of hanging back until the final turn, then uncorking his energy. All that mattered was putting your front wheel over the line first. Winning by the width of a tire counted the same as two or more bike lengths; the difference was that spectators felt

they got their money’s worth from watching tight battles. Pros took pride on giving close shaves.

Disney drove to the 1954 ABLA nationals in Minneapolis, on a quarter-mile asphalt running track. Nationals were an omnium program of four races over an August weekend with points awarded to the top five finishers in each race. “The track was slightly banked, but the wrong way to let rain water drain off the outside surface. Everybody was crashing. I didn’t do any good on the track in my first race. But then the races went to the road. My confidence level went way up. A highlight of my career was crossing the finish line in both the one-mile and five-mile finals and no one was ahead of me.”

Points in both races resulted in winning his first national championship.

Disney was picked for the 1955 PanAm Games team that March in Mexico City. U.S. athletes dominated track and field, gymnastics, and swimming, but cyclists were shut out of medals. Nevertheless, Disney impressed a promoter who offered him an opportunity to race on tracks in Europe.

“I declined,” he said. “Cycling was my hobby. There wasn’t enough in it to leave my job in California.”

Disney trained more miles to bolster stamina on top of a natural jack-rabbit jump. He relied on both qualities at the 1956 Olympic match sprint trials in San Jose. “I raced thirteen sprints in various heats to get to the final. We were riding on an asphalt midget-car track, a

quarter-miler. Only one sprinter was going to the Olympics. I won the final to be that sprinter.”

He flew with the U.S. cycling team to the Games in Melbourne, Australia. “It was a big moment when we marched into the stadium, hearing the band and the roar of the spectators,” he said. He was eliminated in the quarter finals. The experience impressed him to raise standards back home.

Jack Simes was fifteen when he met Disney at the 1958 nationals in Newark, N.J., on the one-mile dirt Weequahic Park horse track. Disney had won his fifth consecutive title. “I thought he was the best in the country,” Simes said. “I hoped he would keep going long enough that I could race against him.”

They never squared off, but they shared a room at the 1964 Tokyo Olympics—Simes as match sprinter, Disney in the tandem sprint with his protégé Tim Mountford. “Disney was quiet, but he could be a bundle of nerves. When we traveled out of the country, he seemed to miss being away from Southern California. He was uncomfortable with the weather, the motels, the food.”

Disney was regarded as the next Jack Heid as the top U.S. sprinter. Heid competed in the 1948 London Olympics and the next year in Copenhagen took home a bronze medal in the amateur match-sprint championship. But the two men had vastly different outlooks.

“Heid was tough,” said Jack Simes III, a national champion and three-time Olympian. “Nothing affected him—he was like a blunt instrument. Disney was not cast in that mold. Except for going abroad for three Olympics, he stayed in America. Disney won a lot of races, competed much longer than Heid, and inspired more people. That made him good for the sport.

He definitely took sprinting here to a new level.”

Al Stiller, Heid’s teammate at the 1948 London Olympics and Disney’s teammate at the 1955 PanAm Games, told me he considered Disney the more consistent sprinter. “As much as I like Jack Heid, he was not as consistent as Disney. Occasionally I could beat Heid—although when he was on, his performance couldn’t be touched.”

Disney’s best sprint against foreign riders took place at the 1959 PanAm Games in Chicago. On a 250-meter board saucer he reached the final against Juan Canto of Argentina. “In the first round, I let him get way too far out there. Going into the last 200 meters, he had thirty meters on me when I poured it on. At the finish, I was drawing even, but too late. I did the same thing in the next match.”

His silver medal marked a 1950s milestone for American cycling. 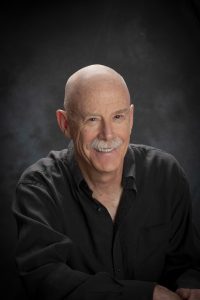 Save 40 percent with Code 6AS20, on the publisher’s link:

Nye is a trustee of the U.S. Bicycling Hall of Fame. He is a prize-winning author of nine books and has contributed to the Washington Post, USA Today, Sports Illustrated, and Humanities Magazine.