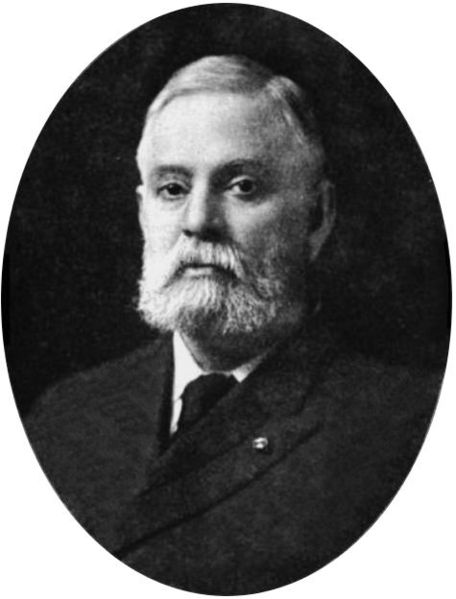 Inducted in 1991 in the Contributor category

Albert Augustus Pope was born in Boston, Massachusetts on May 20, 1843. His father, Charles Pope, although member of a prominent family of New England lumber merchants, had decided to venture out on his own, and when young Albert was only nine years old, he suffered business reverses, which placed the family in “straightened circumstances.” Albert began at once his life of work and entrepreneurial activity. His first of many part-time jobs was riding a plough for a neighboring farmer in his hometown of Brookline. During his summer school break, he delivered fruits and vegetables from these farmers to the Quincy Market in Boston. He made $100 doing this in one season, a tidy sum in those days.
In 1876, as a member of the Newton, Massachusetts City Council, Pope visited the Philadelphia Bicentennial Exhibition of 1876. There he became enthralled with the latest English invention, the high-wheeled bicycle. He began importing European Penny Farthings and taking out US patents on these European models. By the early 1890s, Pope had established a bicycle trust which controlled the central bicycle patents in the US. Nearly every US bicycle manufacturer paid Pope around $10 per bicycle.
Looking to expand his business, Pope also decided to explore the manufacture of bicycles in the United States. In 1877 Pope acquired two English bicycles and commissioned his friend his John Harrington to “reproduce these using local materials.” The cost of this “venture” was $313, but it proved to Pope that an American product could be manufactured to compete with imports. It was the predecessor of the famous Columbia bicycle.Pope (Weed Sewing Machine) Factory
By 1878 Colonel Pope realized he needed to develop a partnership with a larger-scale manufacturing plant, and so, the first American manufacturer of bicycles began with the Columbia Bicycle at the Weed Sewing Machine Company factory in Hartford, Ct. 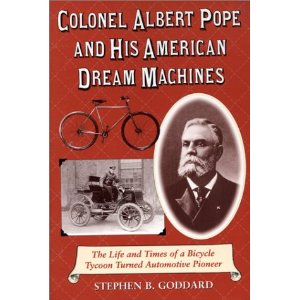 By the mid-1890s, at the height of the bicycle craze, Pope was manufacturing about a quarter million bicycles annually.
The major problem for bicycles at this time was the lack of suitable roads on which to ride them. Pope being not only a bicycle manufacturer but a bicycle-riding enthusiast, was particularly troubled by this problem. In 1880, he formed the Wheeling Association to agitate for and petition governments for improved roads and also became a key sponsor of the League of American Wheelmen.