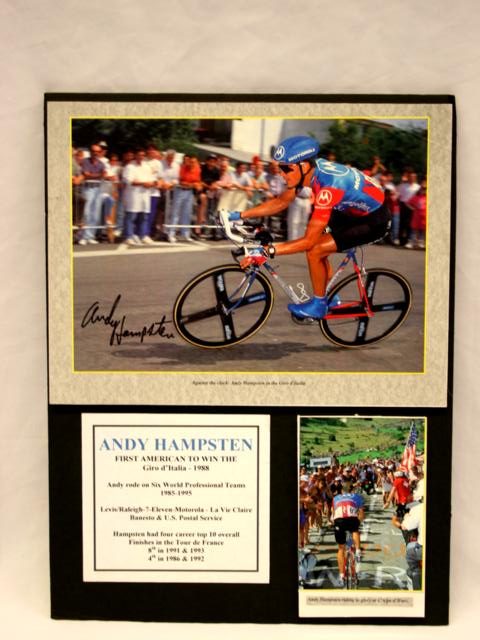 Biography
Andy began his racing career in 1975 at age 15. He became a member of the National Team in 1979. His National awards include a 4th in the Junior Individual TT in 1978 and a gold in 1980 in the same event. He also finished 4th in the National Road Race that same year. He was a member of the 1984 gold medal team that won the Team Time Trial. His World Championship results include a bronze in the Team Time Trial at the 1979 Junior Worlds and a silver medal in 1980 in the same event. Andy rode on the National and World Teams as an amateur until 1983. In 1985 he turned professional and rode on the World Professional Team from 1985-1995. During his professional career he rode with Levis/Raleigh, 7-Eleven, Motorola, LaVie Claire, Banesto, and US Postal. His major International Results are numerous and include: Coors Classic 2nd overall twice, 3rd overall, 4th overall twice, 5th, 7th and 8th overall; Tour de Trump stage win in 1990; Tour de Romandie 3rd overall twice, a stage win and overall 1st place in 1992; Tour de Pays Basque stage win in 1989; Giro d’Italia 10th overall, 5th overall, 3rd overall. Hampsten became the first American to ever win the Giro in 1988 where he finished 1st overall with two stage wins; Pris Nice stage win in 1988 and 5th overall in 1991; Tour of Switzerland 3rd overall and KOM title in 1991, 3rd overall and stage win in 1990 and 1st overall twice both in 1986 and 1987; Hampsten had four career top 10 overall finishes at the Tour de France with an 11th in 1990, 8th overall twice once with a stage win in 1993 and again in 1991 and twice placing 4th overall in 1986 and again in 1992 with a stage win. Hampsten also won the white jersey as the best rookie in the Tour as well as the 1st place team award in 1986 for his role in helping teammate Greg LeMond win the Tour de France. Hampsten’s career spanned 20 years of cycling. He was an excellent Road Rider, Time Trialist and climber. His successes in Europe as one of our first American Professionals helped establish the credibility of our riders and opened the door for many American riders in the years that followed.