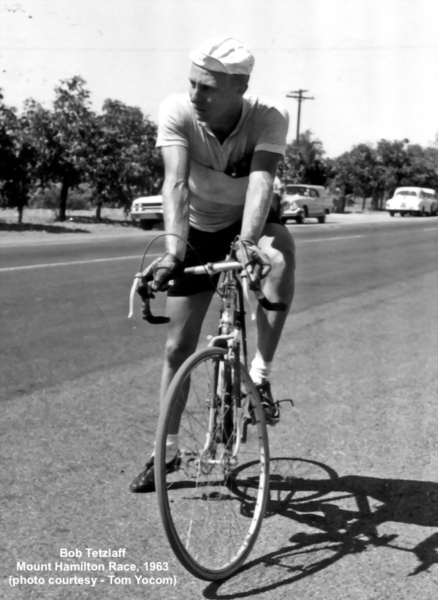 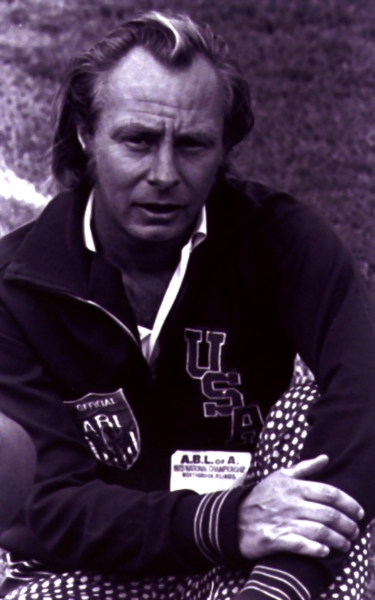 Biography
It’s with great sadness that we note that Bob passed away on September 27th (2012). The entire cycling community has suffered a great loss and Bob will be sorely missed.

Bob Tetzlaff was the first “giant” of modern American cycling, comparable to Greg Lemond, and Lance Armstrong in other eras. In his own time, Bob was known as “King of the Road” for his ability to win every type of race; he was equally as good on the track.
Raised in Los Angeles, from 1950 on he rapidly rose through the ranks, winning the majority of races in which he participated, and in those days, the distinctions between junior and senior being ill defined, he soon became know as the “platinum terror” to all (platinum because of his very light blond hair).

His success led him to think afar. In 1958 he won a major road race in Vancouver, B.C., Canada. But winning it was not, in this case, the primary motivation for Bob’s effort. The first place prize (put up by Doug Peden, brother of the famous Canadian Six-Day racer, Torchy Peden) was a prepaid trip to the World Championships in Rheims, France. After many adventures involving language, customs, equipment, travel, etc. he did finish the race and got his first exposure to “big time” European professional cycling. In Paris he joined a handful of other adventurous American cyclists who had come for the track championships.

From then on, Bob not only won races, but attempted to use his rising notoriety to help bring U.S. cycling into alignment with the international sport. In those years, Canada and Mexico had much bigger races than could be found in the U.S. In the late fifties and early sixties he was the leader and guiding light to numerous American teams attempting to step beyond the limited American horizon. For example, racing as a team was forbidden by American rules, but without such notions one could hardly hope for success abroad. The performance of American teams of at the Tour du St. Laurent, a major stage race in Canada, regularly attended by Tour de France riders, reflects his influence. That he made multiple Olympic and Pan Am teams almost gets lost in the profligacy of his performances.

In the seventies he began the transition to the administrative side of the sport, bringing the ABLofA rulebook into alignment with international standards, taking numerous teams to races in Europe, and promoting his hometown race, the Cat’s Hill Criterium.
He was a lifelong elementary school teacher in Los Gatos, California, where he resided with his wife, Lorine.