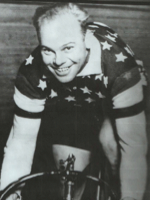 Charley Winter (1904-1986) was a native New Yorker. At the age of 19 in 1923, he placed second in the National Amateur Bicycle League of America championship. In 1924 at the age of 20, Charley won the Amateur Bicycle League of America national championship in Buffalo. The next year in 1925, Charley won the National Cycling Association (predecessor to US Pro Cycling) sprint track championship based on points awarded over the season. From 1926 to 1937 he raced professionally in the U.S. and in cities around Europe. As a rookie professional, he teamed up with future USBHOF Hall of Famer Freddy Spencer from New Jersey to win the December 1927 six-day race in New York’s Madison Square Garden. After winning his last 6 day race in Kansas City in 1937, he retired from racing at the age of 32. Charley worked in the heating business in New York for 40 years. He retired in 1977 and moved to Merced, California with his wife Helen. He died in 1986 at the age of 82.

Charley Winter Career Highlights:
His time of 38.6 seconds for the 1/3 mile standing start in 1923 was a national record that stood for over 63 years.
Amateur Bicycle League of America national champion in 1924.
National track champion in 1925
From 1926 to 1937, competed in 104 total six-day bicycle races with seven victories, nine second place finishes and fourteen third places.
At the 1927 “Garden” six-day race, Winter and Spencer rode a total of 2,522 miles
Won six-days in Montreal and San Francisco in 1934; Pittsburgh and St. Louis in 1935; Toronto in 1936 with bicycling Hall of Famer Jimmy Walthour; and 1937 in Kansas City.
Rode over 225,000 miles while racing during his career. 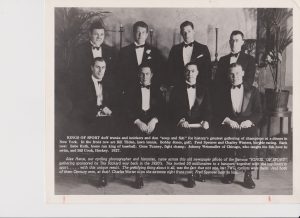 Photo circa December 1925 of Charlie, seated, far right, with his six-day partner, Hall of Famer Freddy Spencer, to his left, among the Kings of Sport. The setting was a major-league gathering organized by boxing promoter Tex Rickard to bring in big money donors for Tex to build a new Madison Square Garden. At a dinner for the Kings of Sport in 1927 in New York, Winter donned a tuxedo for a formal photo with other giants of sports including his six-day partner Freddy Spencer, Babe Ruth of Baseball, Johnny Weismuller of swimming (when Weismuller was an Olympic gold medalist swimming and before he was Tarzan in the movies), Bobby Jones of golf and Bill Tilden of Tennis.