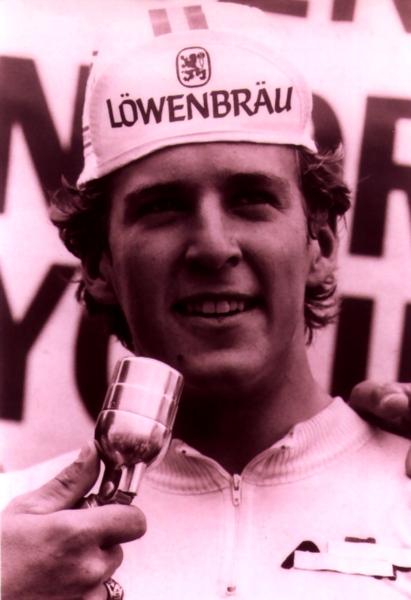 Biography
Davis began competing in 1976 and was credited by Velo News as the Winningest Cyclist in US History with over 300 National and International Category 1 and Professional victories. In 1986, he became the first American to win a stage (stage 3) at the Tour de France, while riding on the American-based team 7-Eleven Cycling Team. He followed up in 1987 by winning stage 12 at the Tour de France. Near the end of his professional career, Davis went on to win the USA National Road Race Championship in 1991.
Davis is married to Connie Carpenter (1984 Olympic Gold Medalist Road Race). They have two children, including UCI Junior and Under 23 World Time Trial Champion, Taylor Phinney.
When Davis retired from competition he continued his involvement in the sport in a variety of ways. He became a television commentator for ABC, CBS, ESPN, NBC and OLN (now Versus) announcing such events as Tour de Pont, the Extreme Games, 1994 World Mountain Bike Championships, 1988 Seoul Olympic Games, Tour of Italy, USPRO Championships and the Tour of America series. He has co-authored a book about cycling training, co-directs Carpenter/Phinney Bike Camps, writes for both Winning Magazine and Bicycling Magazine, was a member of the USPRO Board of Directors from 1997-2000, and was a sports marketing director for Pearl Izumi Technical Wear from 1997-98.
In 2000, after several years of not feeling quite right, Davis was diagnosed with Young Onset Parkinson’s disease and in 2004 he founded the Davis Phinney Foundation for Parkinson’s, a registered 501(c)(3) nonprofit who’s mission is to help people living with Parkinson’s to live well today through research, education and inspiration. More information about the foundation can be found at: www.davisphinneyfoundation.or.
Davis has also penned, The Happiness of Pursuit: A Father’s Courage, a Son’s Love and Life’s Steepest Climb, an inspirational story of how Davis sought to overcome his Parkinson’s by reaching back to what had made him so successful on the bike and adjusting his perspective on what counted as a win. 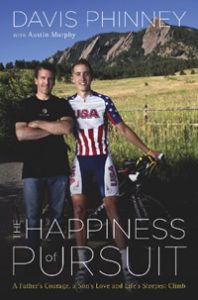