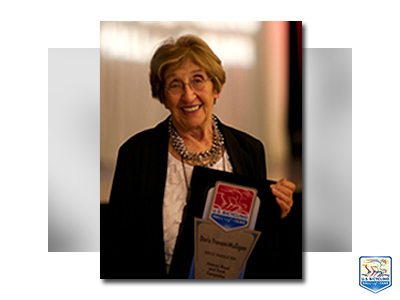 Biography
Doris Travani-Mulligan had a cycling career that spanned nearly 10 years, beginning at the tender age of 12. Travani-Mulligan, a Detroit-native grew up in a city on the edge of motor transportation but has maintained its reputation for being one of the top ten cycling cities in the world. Travani-Mulligan began competitively racing for the Wolverine Sports Club in 1941. The WSC produced nearly 30% of all winners of national medals into the 1990’s.

One of Doris’ training partners was her brother Bob who became an Olympic cyclist. Her father Alfred was a former Italian national cycling champion. Five years after she began competing, Travani-Mulligan placed sixth at the National Championships of 1946 as a 17 year old.. She was the first female cyclist to win four consecutive national championships from 1947 to 1950. Doris remains the only woman to have ever won four straight U.S. national championships. Additionally Travani-Mulligan won the International Dirt Track Championships in 1947 and International Sprint Championships in 1948. At the age of 60, Doris completed a 3,341 mile “Pedal for Power” ride from Los Angeles to Boston in 1990.