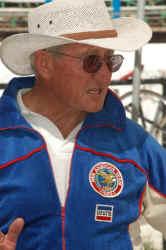 Inducted in 1996 for Contributor

Biography (Deceased November 17, 2020)
Eddie B was born Edward Borysewicz in the northeast Polish territory currently known as Belarus. As a young boy, he was very athletic and had an inherent talent for running. His real love, however, was cycling. Eddie got his first racing bike with help from his running coach, who had no idea what he was starting. Eddie quickly gave up running and became a full time cyclist. Although his running coach did not approve of cycling, Eddie kept riding and training on his bike. After just a few months his natural talent was evident, becoming a double Junior National Champion. 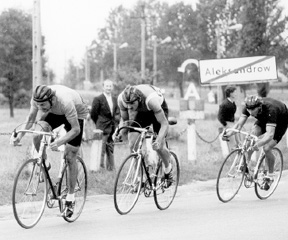 Unfortunately, Eddie had to temporarily put bike racing aside in order to complete his mandatory two-year military service. He had hoped to serve in military sport battalions, however, because his father had an anti-Communist status, he was restricted by the Communist government from entering the sport battalions. Instead he was mandated to serve two years of hard military service.
After Eddie completed his military duty he returned to bike racing, becoming a member of the Polish National Road Team. He was considered the most promising rider in Poland. In what would prove a tragic mistake during a routine physical, Eddie was misdiagnosed with tuberculosis and sent the hospital for an eight-week course of therapy. During his stay he endured an aggressive treatment regime that caused severe liver damage. Later it was discovered Eddie did not have tuberculosis. Treatment was immediately stopped and he was released from the hospital, but unfortunately the damage had already been done.
Although his body was weakened from intensive medical treatments, Eddie returned to the national team and won two national championships. For his accomplishments, he was honored with the highest sport award in Poland – the “Champion in Sport” award.
He remained with the team for another two years. Even with his success as national champion, Eddie realized the damage to his body from tuberculosis treatments was too great and he would never ride as world-class racer. Subsequently, Eddie decided to pursue a career in coaching. In addition, he enrolled in the University of Warsaw masters program focusing on physical education, physical therapy, and coaching.
For the next ten years he coached the best trade teams in Poland and the Junior National Team. During that time he developed thirty national and world champions. He also coached Olympic champion Miczyslaw Nowicki, who won both a bronze and silver medal in the 1976 Olympics for Poland. Nowicki is currently the Minister of Sport in Poland.
Twice Eddie was offered the head coach position for the Polish National Seniors team, but both times turned it down. Instead, he decided to take time off and travel the United States and Canada. While in New Jersey, and just before his scheduled return flight to Poland, a chance visit to a bicycle shop put him in contact with the Vice President of the United States Cycling Federation (USCF), Mike Fraysee. Mr. Fraysee was so impressed with Eddie that he immediately recruited him as head coach of the US National Team. Eddie accepted and immigrated to the United States.
During his twelve years coaching the National Team, his riders won thirty world championships, nine Olympic medals and fifteen Pan American medals. His team also won all events in the 1983 Pan American games held in Venezuela. In 1988, he left the USCF and, in collaboration with Tom Weisel, created the Subaru-Montgomery team, which later became Montgomery-Bell, the US Postal Service Pro Cycling Team, and finally the Discovery Channel Pro Cycling Team.
Throughout his coaching years he has developed and coached some of the worlds best riders including Greg LeMond and Lance Armstrong, the only American winners to date of the Tour de France. Eddie also coached other cycling greats such as Olympic medalists Steve Hegg, Alexi Grewal, Leonard Nitz and Rebecca Twigg.
Eddie retired from coaching professional teams in 1996 and began private amateur coaching from his home in Ramona, CA. In 2006, he was recruited by Poland to coach the Polish National Team in preparation for the 2008 Beijing Olympics, which he accepted.
Eddie was a long-time coach for riders of all ages and levels, many whom have become national and world champions.  He passed away on November 17, 2020 while in Poland.
(courtesy – EB Cycling)

← Dottie Saling Emile Fraysse →
We use cookies on our website to give you the most relevant experience by remembering your preferences and repeat visits. By continuing to use this site or by clicking “Accept”, you consent to the use of ALL cookies. Privacy Policy
Accept All
Manage consent