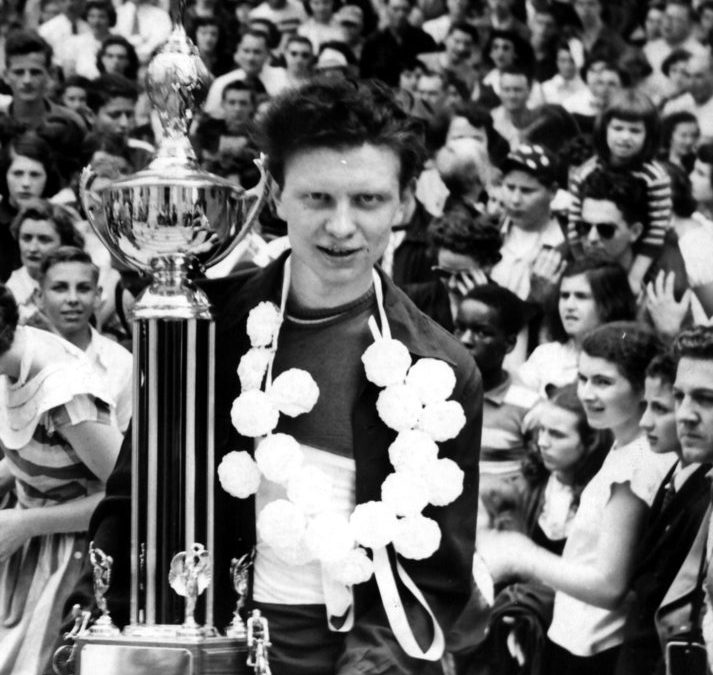 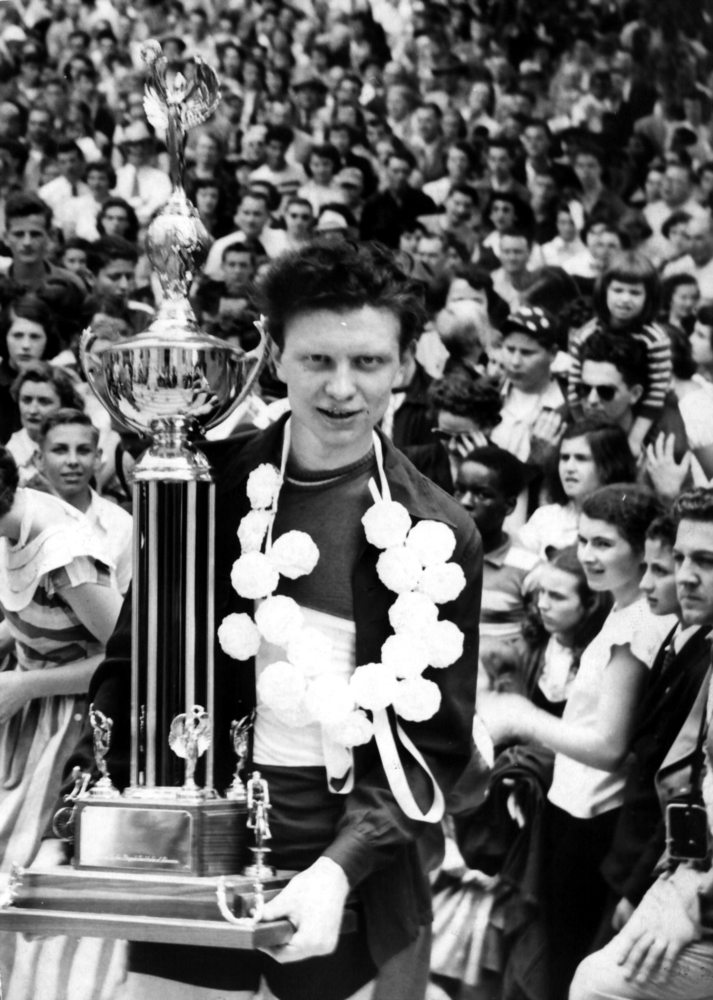 Francois Mertens brought Continental flair to American cycling and set the standard for a half-century. In the late 1940’s through the 1970’s, downtown criteriums up to 50 miles long were popular on the Eastern Seaboard and drew spectators by the thousands, lining sidewalks five and six deep hugging the streets. Audiences spotted Mertens for his silky, smooth pedal action, which appeared effortless and made rivals look like they were pedaling squares.
Mertens immigrated at age 14 in 1946 with his parents from Antwerp, Belgium, to New York City. In Belgium he rode bicycles to get around but the German army’s invasion with tanks during World War II shut down the sport. He started competing in New York as a member of the French Sports Club and returned to Belgium in 1948, working on a freighter to pay for his trip. For three summers, he raced 120 to 160 kilometers on the cobbled roads of Belgium. He won three road races and placed second ten times. Along the way he learned how to use derailleurs, rare in America where cyclists relied on one-speed track bikes.
When he moved back to New York for his first full season of racing in 1951, Mertens knew how to read a race like a newspaper and pick the right breakaways that went up the road and stayed away. He set many national records, including popular distances of 15 and 30 miles, on his way to winning the National Capitol Open in Washington, D.C. around the Ellipse, a flat oval road behind White House. Mertens set the national 100-mile record in the German 100 on Long Island. When the Tour of Somerville 50-mile crit in north-central New Jersey was regarded as the most prestigious U.S. race, Mertens won it in 1951, placed in the top ten through the decade, and scored second in 1970.
Mertens won the National Best All Rounder championship three times between 1951 and 1956, based on points awarded in a series of season-long races. He became a U.S. citizen after 1960. His best years were behind him, and he missed a berth on the 1964 U.S. Olympic team by one place at the trials. At the World Masters Games in 1989 in Denmark, he finished second in the road race and added multiple victories in U.S.C.F. District and regional masters championships.  After being inducted into the U.S. Bicycling Hall of Fame in 2000, Mertens continued racing in the Masters Class until he was 80.

Mertens passed away at the age of 89 on Thursday, November 16, 2021 in Londonderry, New Hampshire.