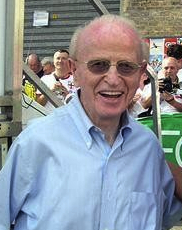 Biography
Born and raised in the east coast Italian seaport of Alcona, Mengoni dreamed, like many young Italians, of winning the Giro d’Italia. He adhered to a “killer” training regimen but eventually came to the conclusion that he lacked the ability to become a professional cyclist. He emigrated in 1957 to the US with $50 in his pocket. After a series of financial ups and downs he invested in several run-down New York City brownstones and this move led to a very successful and prosperous real estate career.
In 1980 he started GS Mengoni in New York which eventually became a powerhouse team in US Bicycle racing. Among its alumni are Steve Bauer, George Hincapie and Mike McCarthy. Fred has had a longtime friendship with Greg LeMond and considers himself one of LeMond’s closest advisors. He became involved with USPRO in its early years and was instrumental in its development. Fred promotes the well known “Mengoni Grand Prix” in New York’s Central Park each year and holds the position of President of USPRO.