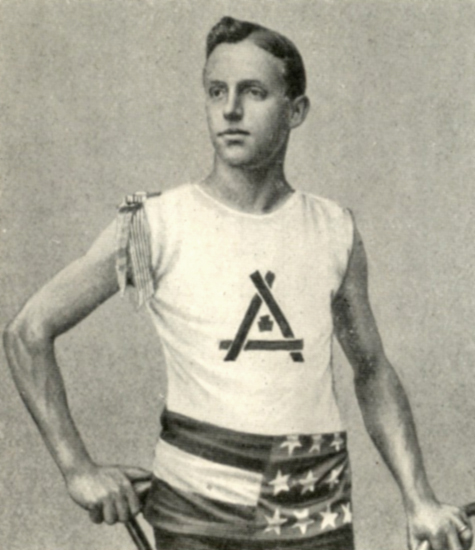 George Banker’s father, William H. Banker, was a carriage maker, who watched the cycling craze sweep the country in the 1880s and opened a bicycle store in the East End of Pittsburgh, PA, near the corner of Highland and Centre Avenues. His sons George and Arthur became avid cyclists. George regularly competed with other young men in the region, winning his first race in Brownsville, PA in 1892. Unable to compete as a professional in the United States under strict amateur rules, George joined cycling phenomenon Arthur Zimmerman in 1894 and moved to Paris, where he turned professional. There he won the inaugural Grand Prix de Paris (at the age of 21), the Austrian Derby, and races in Antwerp, Roubaix, and Cologne.

George Banker has the distinction of being America’s first world professional champion sprinter and the first to win two world championship medals. At the inaugural worlds professional sprint championship in August 1895 in Cologne, Germany, Banker won, but officials threw the race out and ran it again the next month in Paris, where he finished second. He finally triumphed at the 1898 World’s Sprint Championship in Vienna, Austria.

Banker maintained a busy schedule with tandem races, pursuit matches, and pack races from 2 miles to 10 miles. He competed in 80 races a year between 1894 and 1899 in France, Italy, Germany, Spain, Switzerland, and Algeria. Banker is credited with winning 80 grand prix events in six countries.

He returned from Europe in 1900. Investing his European winnings, he and brother Arthur transformed their bicycle shop into the Banker Brothers Company to sell early automobiles. George continued in the automotive business until his death at age forty-four in 1917.