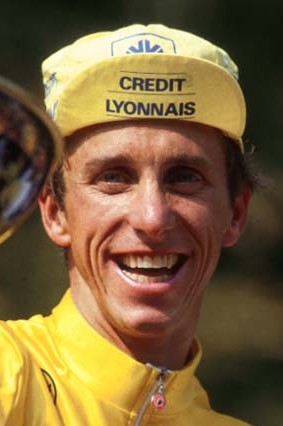 Inducted in 1996 for Modern Road & Track Competitor (Post-1975)
Biography
On the final day in the 1989 Tour de France, an individual time trial of 15.3 miles from Versailles to Paris’s Champs-Elysées Boulevard near the Arc de Triomphe, Greg LeMond started in second place, trailing Frenchman Laurent Fignon by 50 seconds, a lead widely considered as giving Fignon a lock on the three-week race of races. LeMond surged over the roads to Paris, executing the perfect ride. He averaged 34 miles an hour―the fastest anyone had ridden in the history of Le Tour―to usurp the lead and win overall by eight seconds, the smallest margin of victory since the event began in 1903. The international media called his performance a miracle and heralded LeMond as the rider of the century.
Weeks after winning the Tour, LeMond outsprinted two breakaway companions on rain-soaked pavement in Chambéry, France to capture the 1989 world road championship, his second world pro road race title. Sports Illustrated featured him as Sportsman of the Year.
LeMond’s media attention, beginning as the first U.S. rider to win three junior world championships at 16 in 1977, propelled cycling in the 1980s to a popular sport in the United States, although for most of his career he lived in Europe. More than any other rider, the blond-haired, blue-eyed rider from Reno, Nevada exerted a profound influence that changed the sport. After turning pro in 1980 with a contract of $12,000 a year to ride for the French team Renault, LeMond pushed the staid, traditional salary scale governing pro cyclists and in 1990 became the first millionaire cyclist, which in turn boosted other pro rider salaries.
Sometimes overlooked in LeMond’s many career highlights are his technical influences. Among them are wearing a tear-drop helmet in time trials, using aero handlebars that put him in a ski-tuck position in time trials, doing wind-tunnel testing to refine his time trial and road positions, using a heart-rate monitor, and replacing seven-inch zippers on the front of jerseys to full-zip jerseys for riding on hot days.
He developed as a junior rider in the late 1970s, chiefly after going to France and Belgium on his own to compete in longer races when the U.S. Cycling Federation was in early development of its programs. LeMond’s first world pro road race championship at 22 in 1983 in Altenrhein, Switzerland, marked a major first for U.S. cyclists. But it took winning his first Tour de France in 1986 to catapult him to recognition in the United States. 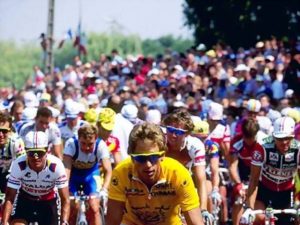 Then in April 1987 at the peak of his career tragedy struck. He was hit with a shot blast and nearly bled to death in a hunting accident in rural northern California,. Surgeons removed dozens of pellets that tore into his body and collapsed a lung, but to protect his vital organs they had to leave some 40 lead pellets lodged in his body. He recovered and, remarkably, won his third Tour de France in 1990. However, the side effects of lead in his body took its toll and left him struggling in competitions. He retired after the 1994 season. LeMond’s many breakthroughs inspired millions to ride and set a high standard for racers to follow his wheel marks.
(Courtesy – Peter Joffre Nye)