Inducted in 2002 for Modern Road & Track Competitor (1945-1975)
Biography
Skip, born in Indianapolis, Indiana in the mid 40’s, and raised in Southern California, has progressed through a national and international racing and coaching career that spans 40 years, finally retiring from racing at age 50 while still competing as a Category 1-2 rider. He was a member of the 1964, 1968 and 1972 Olympic Teams, and the 1967 and 1971 Pan American Teams (bronze medallist). During his long career, Skip competed both successfully on the road and the track, competing in the Olympic and Pan American Games as an individual and team pursuitist, and competing in the Pan American Games and World Championship as a sprinter and sprint tandem rider. From the late 60’s to the mid 70’s Skip competed in some 28 countries and recorded 297 top three international placings. In 1972, Skip was awarded the unofficial title of ‘World Scratch Race Champion’ by the Danish Cycling Federation after winning every scratch race at all three Danish International Sprint Grand Prix’s that year. He won the World Masters Road Championship in Austria in 1987 and was the Silver Medallist in the World Masters Games Road Race in 1989. From 1989-92, Skip was responsible for initiating the World Cup Masters Track Championship, the event that later became the Masters World Track Championships. Having coached and taught many riders over the years, he was the coach of the very successful corporate employee Team EDS (1992-98). Skip has a degree and advanced certifications in exercise physiology education. He currently works in the field of cardiac medicine. He lives in McKinney, Texas. 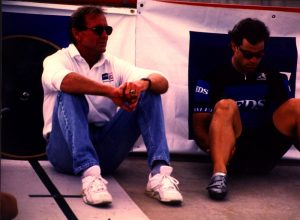 ← Greg LeMond Jack Disney →
We use cookies on our website to give you the most relevant experience by remembering your preferences and repeat visits. By continuing to use this site or by clicking “Accept”, you consent to the use of ALL cookies. Privacy Policy
Accept All
Manage consent