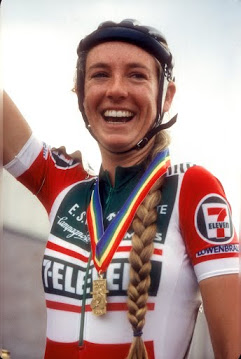 From her meteoric debut on the American scene in 1984, to her final major race – a dominating victory in the 1993 U.S. Women’s national championship road race – Inga proved herself to be one of the greatest women’s racers the sport has ever seen. She began as a runner in her Reno, Nevada high school. She won nine individual state running titles in the largest school division. She attended Cal Poly San Luis Obispo to run and study engineering. As a freshman, she finished fourth in the cross country national championships. In 1984 when some men in a local bicycle shop told her that the first ever Women’s Tour de France would be too tough for women, Inga bought a racing bike. Inga won the first 5 cycling races that she entered and she qualified for the Olympic Trials. She went on to finish 21st in the 1984 Los Angeles Olympics Road Race. Due to overtraining and questionable directions by team coaches, Inga became seriously ill while battling Chronic Fatigue Syndrome. After recovering and relying on her own healthy training methods, she won the World Trials and qualified for the 1985 World Championships in road racing. 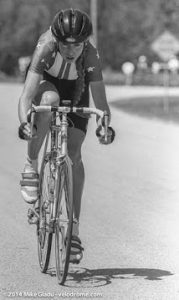 She went on to win 10 National Championships (1987, 1988, 1991 & 1993) and finished second in three world championships (1987, 1990 & 1991). She competed in two more Olympics (1988 Seoul, 1992 Barcelona). After winning the 1993 U.S. Women’s national championship road race, Thompson abruptly severed all ties with cycling. In 2012 she emerged in the public eye again and began sharing concerns about the sport based on her extensive experiences. Inga Thompson now enjoys skiing at her ranch in Hell’s Canyon, located along the border of eastern Oregon. 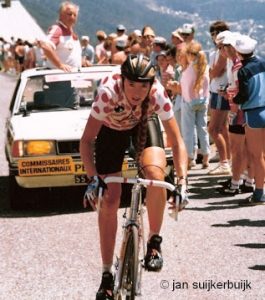