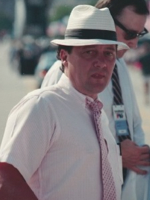 Contributor to the Sport
2014 Inductee

In 1940, Jerry Casale Jr. was literally born into the sport of cycling. His parents owned and operated the Hill Cycle Shop in the Chestnut Hill section of Philadelphia since 1929. His father Gerard Casale Sr. also coached riders and supported amateur cycling events as a leader of the Pennsylvania Bicycle Club. As a young man, Jerry Jr. raced bicycles, coached promising cyclists and became a mechanic. He developed the bike shop into the place for imported high-end racing components and frame sets. In the late 1970’s he built his own line of custom road and track racing frame sets. In the late 1980’s he and his engineer son Nick created a prototype for a monocoque carbon fiber racing frame. Jerry Jr. became the chief mechanic for the US PRO Cycling and traveled with the team to Europe, South America and the United States.

At the 1984 World Championships in Barcelona, Spain he developed the idea to produce a professional cycling event in his hometown. He partnered with friends David Chauner and Jack Simes to create the Core States Championship in 1985. The 156 mile race started at the Philadelphia Art Museum and included the tough 17% grade climb known as the “Manayunk Wall”. The race crowned the U.S. National pro road racing champion and offered the largest purse at the time of any single day cycling race in the world. He and Chauner created Threshold Sports LLC and went on to produce a multitude of professional cycling events around the U.S. They also produced the 1996 Olympic Cycling Events (Road, Track and Mountain Bike) in Atlanta including the Paralympic Games of 1996. Jerry was a tireless supporter of cycling and he was well regarded by everyone who worked with him. Jerry passed away in 2012 and in his honor, Philadelphia cyclists and friends held the “Party on the Manayunk Wall”.