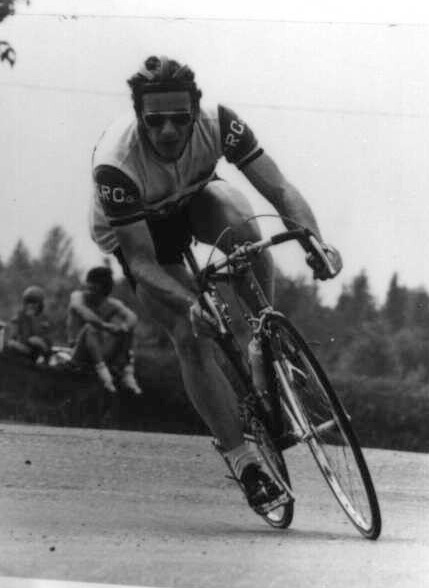 Biography
Born in Boston, Massachusetts, Allis began racing while a student at Princeton University, and had not yet graduated when he led three of his Princeton teammates to compete in the world road championships in Ronse, Belgium. The team performed poorly in the road race, but better in the time trial, where they took 20th place. This was the first American presence in international cycling competition since the era of Major Taylor.
Allis stayed to race in Europe when his teammates returned to the United States, signing on as a category 1 amateur with the Paris club, ACBB. He was the first English speaker to ride for the team.
Despite the skepticism of French cycling enthusiasts, who informed him that Americans were biologically unfit to compete, Allis did achieve victories, including Paris to Cayeux-sur-Mer in 1964. The team was so surprised to see their American rider win that they had to scramble to find him a clean jersey to wear on the podium; he had been given the worst one in the shop. His victory was covered in L’Équipe and mentioned in the New York Times.
Allis returned home to complete his Princeton degree. In 1965, he placed second in the national collegiate road championship. In his senior year, he participated in his first Olympic Games. After placing fourth in trials in Central Park, he was selected for the men’s individual road race, but was under academic probation and the school almost declined to allow him to attend. However, somebody pointed out to the administration that Harvard and Yale each had two Olympians that year and that, without Allis, Princeton would have had only one (Bill Bradley). He produced the best American result in the event that year, 70th out of 126 riders. Allis also raced in the team time trial in the 1968 Olympics in Mexico City and the road race at the 1972 Olympics in Munich, where he took 63rd. He said his failure to gain success at the Olympics was the biggest disappointment of his career.
After a brief stint in the Army, Allis shone in American racing in the early 1970s, organizing along with Dave Chauner the Raleigh team that dominated American racing, and winning the national road championship in 1974, which he won by applying brutal tactics against the newcomer Tommy Officer, the 175-mile Quebec-Montreal race in 1973, and two runnings of the Mount Washington Hill Climb. He retired from national competition in 1976.