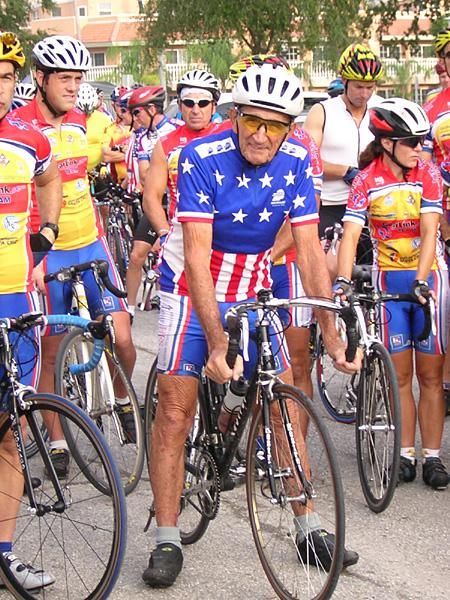 Biography
John Sinibaldi of Union City, N.J., competed in the 1932 Los Angeles Olympics, the final road race held as an individual time trial, and the 1936 Berlin Olympics where the massed-start road race was introduced in the quadrennial Games. Over his racing career from 1928 to 2005, the New Jersey native won 18 national age-group titles. 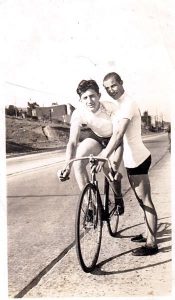 In his prime Sinibaldi stood 6 feet and weighed 200 pounds. He worked 10-hour days as a sheet-metal mechanic and trained after work and on weekends, riding one-speed steel bicycle frames made in local bike shops. The 1932 Olympics took place during the Great Depression so severe that the Amateur Bicycle League of America (predecessor to USA Cycling) suspended national championships between 1931 and 1934 in order to allocate funds to send riders to the LA Olympics. Other countries were also hard pressed―only 11 countries entered riders compared with 20 countries in the two previous Games.

Sinibaldi won the New Jersey state trials of a 100-kilometer individual time trial and made the four-rider national road team. When he traveled west on the train from New Jersey to Los Angeles, he sat up the whole way for four days because he didn’t have the extra money for a bed in the sleeper car.

In the LA Olympics road race along a highway hugging the hilly, windblown Pacific coastline, Sinibaldi pedaled his bicycle with a one-speed fixed gear, which didn’t allow coasting, while European riders had one-speed bicycles equipped with a freewheel, which allowed for coasting and permitted them to descend faster down steep hills. Sinibaldi finished 29th of 33 riders and was determined to improve. 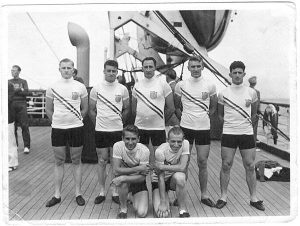 The next year, however, he fell on a training ride and separated three vertebrae. He underwent experimental surgery in which bone from his left shin was implanted to fuse the vertebrae. After recovery, he resumed training and racing. In June 1935, he won a 100-kilometer time trial in Paterson, N.J., setting a new national record for 60 miles, in 2:35:06.

He made the team for the Berlin Olympics where 100 cyclists from 20 countries started in a peloton mixing riders like Sinibaldi on one-speed fixed gears and others with derailleurs. Sinibaldi fell four times and finished 47th. World War II cancelled the next two Olympics. He resumed racing in 1975 and won age-group competitions for thirty years.