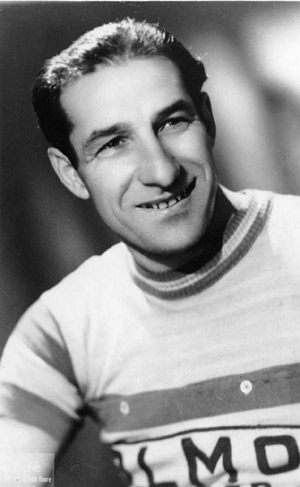 Biography
From the era when European road racers wore a spare tire in a figure eight over their back and through their arms, Joseph Magnani holds the distinction as the only U.S. racer to compete against Italian legends Fausto Coppi and Gino Bartali. Magnani was born in the central Illinois town of LaSalle and grew up in Mount Clare. He earned the reputation as one of his generation’s best riders from 1935 to 1948 on French and Italian pro teams.
Magnani established a name for himself when he won the 1935 race from Marseille to Nice in southern France, a regional classic previously won by Italy’s world champion Alfredo Binda. Magnani made a bold break in the final kilometers after seven hours of racing. In 1938 he scored victory in the 149-mile Marseille-Toulon race, followed by the two-day Circuit of Lourdes. He set the Nice Velodrome hour record, pedaling 42 kilometers. The next year he rode in the week-long Paris-Nice stage race, finishing ninth overall.
He was 28 in 1940 when he won a stage of the Grand Prix de la Côte d’Azur, where he posed for a celebratory photo with his fiancé, Mimi. The couple married at the end of the 1941 season. By then politics intervened and the German army invaded France. Magnani was arrested by the Gestapo in February 1942 and confined in a concentration camp in northern France. He stood 5-11, and his weight dropped from 170 pounds to 98 pounds. After U.S. and British troops launched the Normandy invasion in June 1944 and liberated Paris, Magnani and others were set free. He reunited his wife after two years of captivity. Their son Rudy was born in 1945. 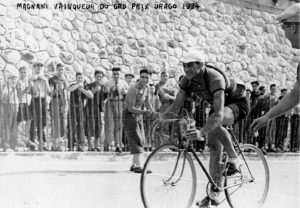 Italian star and world-hour record holder Guiseppe Olmo formed a pro team and hired Magnani to ride for his Olmo squad in the 1946 Giro d’Italia, making Magnani the first U.S. rider to compete in a Grand Tour. He rode support for the team leader, who wore the coveted pink jersey of race leader until Magnani suffered a hard fall and had to withdraw.
Magnani rode in the Tour of Switzerland, and in the 1947 world championship road race in Reims, France, he scored a seventh-place finish. The next year he retired from racing and went to work for the Schwinn bicycle company in Chicago.
(Courtesy – Peter Joffre Nye)