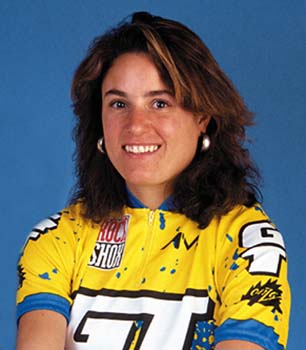 Inducted in 2005 for Mountain Biking

Biography
Juli Furtado, or Queen Juli, is an icon in the world of mountain biking. Furtado shared a winter sports background familiar to more than a few cyclists, growing up skiing in Vermont. In 1980, she was named to the U.S. Ski Team where she competed until 1987. Furtado left skiing when knee injuries ultimately led her to transition to the bicycle as a means of rehabbing her six reconstructive knee surgeries.
After winning the U.S. National Road Racing title in 1989, Juli graduated from the University of Colorado’s Business School in 1991. She then switched her focus to mountain biking, amassing a long string of major wins and national titles. In 1994, she had an amazing run of 17 first place finishes out of 18 events, only to lose the World Championship that season.
While at a race outside of Madrid, Spain, she recalls one of her favorite race memories—finding a tiny kitten! Furtado, a passionate animal lover, said, “We were high in the hills and I believe it was one of our first World Cups. So, the weather was quite cold: it even snowed on us! Anyhow, I don’t recall how I found this tiny kitten, but I did. So, I brought the kitten to my press conference and then to the house we were staying at. Our team and I named the kitten Sonny and he stayed with us the whole week. When it was time to leave, we didn’t want to abandon Sonny, so my message therapist Lori and bike mechanic Doug drove Sonny all the way to Belgium, where one of our friends adopted Sonny and hopefully had a happy ever after life!”
Furtado’s historic career took a dramatic turn during her 1996 season, which would include her participation in the Olympics. Furtado had begun feeling lethargic and her racing season was suffering and placed 10th in the Olympics. In 1997, Furtado was diagnosed with Systemic Lupus Erythematosus, an autoimmune disease most often referred to as Lupus, ultimately ending her career. 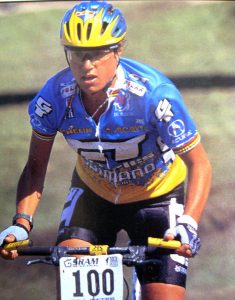 Furtado briefly wrote for Velo News and did television commentary, but a majority of her post racing career has been in the marketing/sponsorship department for Santa Cruz Bicycles developing and managing her own line of women’s specific mountain bikes, the Juliana.
Furtado now lives in northern California with her son, Wyatt and sits on the board of Jacob’s Heart , which helps children fighting cancer. She was profiled in, “Juli Furtado: Rugged Racer” by Morgan Hughes, Lerner Publishing Group, 1998.
(Courtesy – Peter Cowley)