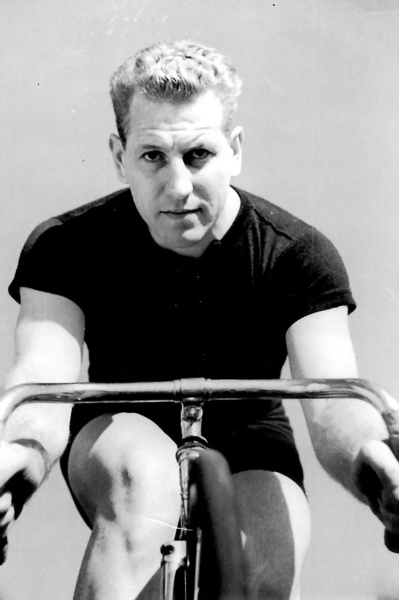 Biography
Thomas Edison, the wizard who transformed the world with the electric light bulb and motion pictures, liked to tell admirers that genius was 1 percent inspiration and 99 percent perspiration. One of his employees, Norman Hill, applied those proportions to cycling. It paid off: Hill won three national all-round championships and three international six-day races. And he developed speed and stamina that made him a favorite with spectators in the 1930s.
One measure of Hill’s stature is the roster of riders he teamed with in six-day races. His partners included Giro d’Italia and world road racing champion Alfredo Binda of Italy, ironman Reggie McNamara of Australia, and Tour of Flanders winner Gérard Debates of Belgium.
Hill grew up in San Jose, California. He began cycling to deliver copies of the San Jose Berkeley-Herald and joined the Garden City Wheelman at 14 in 1920. He read the popular Police Gazette, which covered six-day races and the star riders such as Reggie McNamara, Bobby Walthour Jr., and Freddy Spencer who became his heroes.
By 1924, Hill turned 18 and had done well enough in amateur races to turn pro and head east to Newark, New Jersey to break into major league pro cycling. He took the train cross-country and landed three days later in Newark with $6 and pocket change.
Hill threw himself into racing on the outdoor board tracks, six laps to the mile, three times a week in Newark and twice a week in New York City. Programs featured distances from the half-mile to 25 miles, and a mix of handicap, pursuit, miss-and-out, and one-mile matches. Boisterous audiences of 12,000 in Newark and 20,000 in New York City had no reservations about letting riders know what they thought of their performances. Admission tickets generated revenue that paid winners $200, paying to fifth place, in days when a new Chevrolet or Ford cost $450.
“They were fast races,” Hill recalled. “I didn’t see any of the front of them for a few years.”
After Labor Day, pros hit the indoor six-day circuit around North America. Fifteen teams of two riders each alternated racing around board tracks 10 laps to the mile, from 12:01 a.m. Monday through midnight Saturday night. Young pro Norm Hill in November 1924 earned a contract for his first six-day in the Chicago Coliseum. “I wasn’t that good a rider then. But the organizer signed me up―because to have winners, you’ve got to have some losers.”
In his first year East, Hill won the heart of Betty Gethard of Newark. They married December 27, and eventually celebrated their 70th anniversary.
After returning from Chicago, Hill went to work for Thomas Edison, then 77 and operating a laboratory in the Newark suburb of West Orange. Hill’s job put him in a high-ceiling room off the famous inventor’s lab, with different weights of paper to make a battery cell in the inventor’s quest to create a better battery for electric cars―the one dream that eluded Edison.
“Guys would come in and sneak a smoke because the ventilation in my room would clear it up,” Hill recalled. Cigarette smoke irritated the inventor, who would stroll around and start sniffing in the office where Hill worked. When Edison asked if that was tobacco smoke he was smelling, Hill would tell him he didn’t smoke. When spring came, Hill quit because he could earn more racing on tracks.
Hill worked his way up the pro ranks. Toward the end of the season, the track management put on a series of 25-mile paced races. Pace riders were hired to ride two or three laps as fast as they could at the front, then peel off for another rider to take over and keep the pace boiling. “For the rest of us, usually 25 to 30 of us who started, maybe less than 10 finished,” Hill said. “Those were my best races.”
In 1933, Hill dethroned the defending U.S. National All Round champion on the track in Nutley, in north-central New Jersey, and won two more all-round titles in 1935 and 1936. 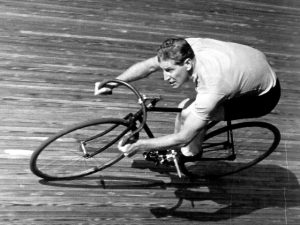 The six-day circuit enjoyed such a passionate following that sixes drew coverage in Esquire and Fortune. Popular entertainers who fired the official starting pistol of sixes Hill rode included Gypsy Rose Lee, Al Jolson, and Jimmy Durante. “Durante, with his big nose, had a gag he used to do with Gerry Debates,” Hill said. “Gerry would grab Jimmy by the nose and pull him around the track. Jimmy clowned―running and flailing his arms like a windmill. After midnight, with 12,000 fans and various orchestras coming in to play when the clubs close in Harlem, the Garden’s atmosphere was like a big nightclub. ”
Hill was victorious in two six-day victories in Boston, and another one in Cleveland. However, in early 1937 at the Buffalo six-day, around the 12-lap vélodrome in Broadway Auditorium, he crashed and injured three vertebrae. “I was a busted-up bike rider.”
He retired from cycling an went to work for General Motors, starting as a service sales manager and earned his way up into management. He and his wife settled in the Chicago suburb of Elk Grove Village.
In 1995 he looked back in an interview and said one of his favorite memories was the first time he was crowned national all-round champion, at the Nutley Velodrome. “The awards presented started with speeches, then I was crowned and given a bouquet of flowers.”
(Courtesy – Peter Joffre Nye)