Biography
Martin competed from 1963 to 1973. He was a member of the 1964 (4000 meter Pursuit Team) and 1968 (100 K Team Time Trial) Olympic Teams. In 1971 was a member of the U.S. (100 K Team Time Trial) Pan American Team. Competed in Europe in 1965 and 1966 winning four races, 11 2nd places and 26 top five placings. He won more than 50 races in his career that also included international wins in Italy, Canada and Mexico.
Martin began his coaching career in 1974. Later that year he coached the 1974 Montreal World’s Championship men’s U.S. 100 K Team Time Trial to ninth place, which represented a breakthrough for U.S. men at the worlds. Martin was the first U.S. National Road Coach for the USCF from 1975 to 1977. In 1976 Martin coached the U.S. Road Team at the Montreal Olympic Games and produced another breakthrough result with George Mount’s sixth place in the Individual Road Race. In 1977 Martin coached the U.S. team at the World Championships in Venezuela with Connie Carpenter taking a silver medal in the women’s road race and Mark Pringle a 10th in the men’s event. 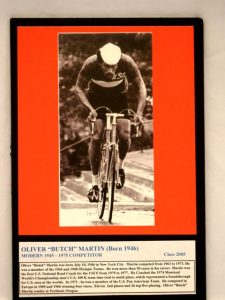