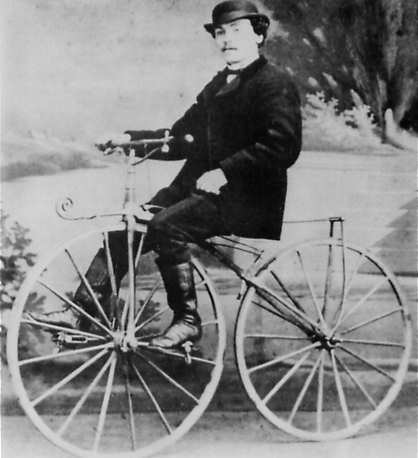 Inducted in 2005 for Contributor

Biography (1843 – 1891)
Born in France , Pierre Lallement was trained, and worked, as a carriage maker. At the time (1855-1862), carriage makers in several different countries were simultaneously applying new technologies and inventions to the “velocipede”, creating the two-wheeled, steerable, human-powered machine.
The authentic history of the bicycle, as it is known today, is somewhat complicated as its development was also the beginnings of the invention of the automobile, and many individuals can lay claim to making important improvements to the velocipede, that were later incorporated in the automobile. It is believed that Lallement conceived the idea of attaching crank arms and pedals to the front wheel of a bicycle and built his prototype in 1863.
Pierre Lallement moved to America in 1865 and received a patent for his invention in 1866. His contribution to bicycling not only includes the use of cranks on the front wheel for motion, he is also credited with the invention of the pedal. Unfortunately, he died in 1891 poor and unrecognized because his invention did not immediately become popular. Today he is credited with being the father of the modern day bicycle. He has been memorialized in Boston ‘s Southwest Corridor Park with a bike path in his name and a monument in his honor. 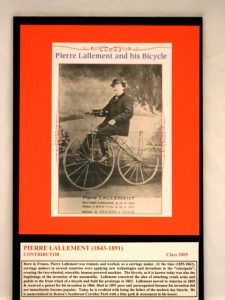