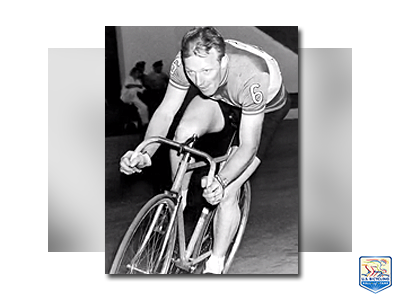 Biography
Renowned as a sprinter, Dick Cortright represented the United States at the 1952, 1956 and 1960 Olympics. He was the first U.S. cyclist to qualify for three straight Olympic teams. He also won a Gold Medal in 1959 while setting a U.S. record in the 4,000 meter Team Pursuit at the Pan American Games in Chicago. By the time he was 20, Cortright was a national amateur champion and he won 18 major races in 1949.
In 1950 he was named the Senior Amateur Bicycle League of America’s Best All-Around Rider. In that season, interrupted by a fractured collarbone, he won 26 consecutive races demonstrating unmatched dominance over contemporary competitors. He was the 1954 50-Mile National Champion and won the one-mile U.S. title in 1955. Cortright was named Buffalo’s Athlete of the Year in 1960. He went on to compete as a professional six-day bicycle racer from 1961 to 1966.
After his racing career ended, Cortright became a clerk with the U.S. Postal Service retiring in the early 1990s. As a former Olympian he traveled across the country as a speaker at “Touch the Torch” ceremonies. Dick was the first cyclist to be honored by the Greater Buffalo Sports Hall of Fame in 1995. Cortright passed away in 2009.