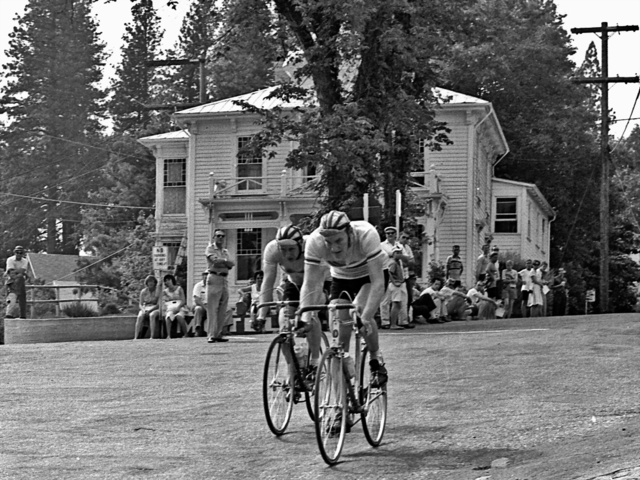 Biography
In the 1950’s serious cycling was not a popular activity. So it was a quasi-miracle that Rob Parsons passionately rode his first “10-speed”, initially to enjoy the exhilarating feelings of strength and speed, then bumping into others as madly pedaling their own bikes, and within two years leaping from being a precocious 14 year old to a senior-slaying 16 year old.
That first year, 1959, around his So. California La Canada home, quickly opened cycling to and for Rob. He wouldn’t have used the term, but he was a born “beast”. If he didn’t crash because he was going too fast for circumstances, he usually won.
His first sampling of out-of-town racing was at the 1961 Tour of Florissant in St. Louis, a major criterium attended by every cyclist east of the Rockies. Rob placed third, which certainly got the notice of the crit sprinters who thought they “owned” such races.
Indeed, he was soon invited to be part of the U.S. National team riding the Vuelta de Mexico. He hung with the leaders through the mountains of the first week until a very slow wheel change dropped him down g.c. Later, the almost inevitable illness endemic to foreigners in this race sidelined him as well. Remember, at this time he was still only sixteen!
Fellow Californian, Hall of Fame member, Bob Tetzlaff, had been pushing boundaries for some years, and was quick to ask Parsons to join his team on their annual racing trip to Canada in 1962. The first stage of their first race, the Tour du Lac St. Jean, covered 154 miles. So impressive had Parsons been (and so unknown to the Canadians and Europeans riding the race, who by this time kept a close eye on Tetzlaff, who had been all too successful in past years – like all Canadian races, the riders were very interested in the cash prizes) that Tetzlaff had no hesitation putting the whole team at Parsons’ disposal. They pulled back early breaks, leaving Rob fresh to join Bolzon, the Italian defending winner, in the decisive escape. The Americans were almost chuckling to themselves when they arrived at the finish to find Parsons had won, as they and no one else had expected.
Years passed with Rob winning most everything in sight. Particularly notable were his five successive Nevada City victories, a record Greg LeMond approached later with three first place finishes. What’s hidden behind the statistics is the style of Parsons’ Nevada City wins. His were closely contested triumphs full of lap by lap variation, particularly as he and Tim Kelly traded attacks. LeMond and others in recent years may have gone faster, but what sold Nevada City residents on the then just developing race was its mesmerizing intensity. Every time Rob dug deep and found a way to win, but how he’d win wasn’t clear until near or at the finish. LeMond, and even later, Armstrong, won by something like 3 laps, which were surely amazing feats of athleticism, but they never provided the heroic mano-a-mano struggles that marked the Parsons years. It is still the most demanding criterium in the U.S.
Parsons also won famous races in the East, such as the Art Longsjo Memorial race at Fitchburg, Massachusetts. He ventured to Europe and joined the ACBB, at the time the most prestigious amateur team in Europe. He made the 1963 Pan American road team, where they earned unprecedented silver medals. Parsons followed up by again making the team for the 1967 Pan Games. In 1966 he proved his infinite adaptability by going to Colorado and winning the Aspen Alpine Cup (the inspiration for the Red Zinger) over the very good locals who were used to 10,000 ft., and when Independence Pass was still climbed on dirt.
By 1968, Rob Parsons was about as seasoned an “old pro” as an American could be. An awkward situation in 1964 meant he hadn’t made the Olympic team. In 1968, Rob intended to rectify that Olympic setback. On a very demanding course through the Santa Monica Mountains, Rob roared away from everyone at the first day of the Trials to guarantee his place on the team. That was Monday. On Friday was the National Road Championships on the same circuit. The National Road Championships had only been in existence for 3 years, every one won by a veteran California “roadie” (’65 – Mike Hiltner, ’66 – Bob Tetzlaff, and ’67 – Rob Parsons). Something similar was expected this time, so it was a shock to all to see a non-Californian nip the mighty Parsons in the sprint. (A new era of another “beast” had just been announced, that of John Howard.)
The Olympic Games in Mexico fulfilled Rob’s competitive ambitions. He moved to his current home near Santa Cruz, California, where he applied his considerable understanding of cycling in the role of coach. Rob had long since learned cycling was a sport for “tete et jambes” (head and legs), as Tour de France founder, Henri Desgrange, termed it. In Rob’s time, training was mostly a process of doing a lot of miles, and if strong enough, a lot more miles again. Proper rest, proper nutrition, heart rate feedback techniques, etc. were things Rob had pretty well had to discover on his own, however commonplace they may be today. As his career developed, he became better and better at preparing himself to “peak” for certain events.