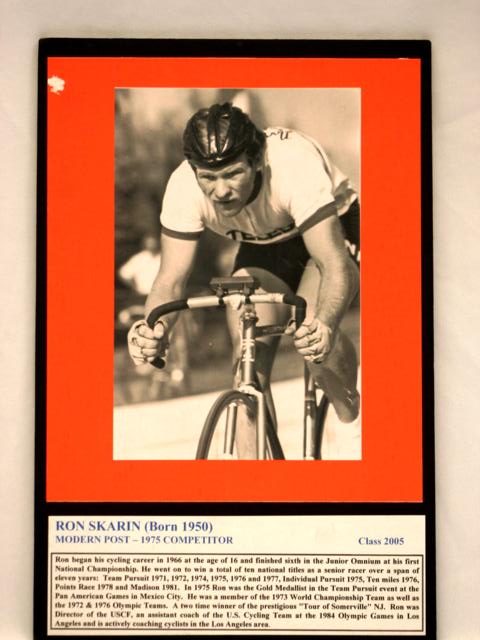 Inducted in 2005 for Modern Road & Track Competitor (Post-1975)
Biography
Ron began his cycling career in 1968 at the age of 16 and finished fifth in the Junior Omnium at his first National Championship in Detroit in 1969. He went on to win a total of ten national titles as a senior racer over a span of eleven years: Team Pursuit 1971, 1972, 1974, 1975, 1976 and 1977, Individual Pursuit 1975, Ten mile 1976, Points Race 1978 and Madison 1981. In 1975 Ron was the Gold Medalist in the Team Pursuit event at the Pan American Games in Mexico City.
He was a member of the 1973 World Championship Team as well as the 1972 & 1976 Olympic Teams. He was a two-time winner of the prestigious “Tour of Somerville” NJ, and won the USCF National Prestige Classic race series in 1974.
Ron was Director of the USCF in 1979-80, and was an assistant coach of the U.S. Cycling Team at the 1984 Olympic Games in Los Angeles. He conducted introductory Track cycling classes at the 7-11 Olympic Velodrome and the Encino Velodrome from 1981 through 1986. Since 1981 Ron has been active in Southern California bike organizations promoting bicycling for transportation and still rides his bike to work nearly every day.
Ron also was one of the pioneers in the new sport of Human Powered Vehicle (HPV) racing. Between 1973 and 1980 he broke all existing world speed records up to and including the coveted One Hour cycling record, and is distinguished for still holding the World Hour Record on a Tandem HPV of 46.3 miles which was set in 1980. In 1977 Ron was one of the early test pilots for the Human Powered Airplane (the Gossamer Condor) which eventually was able to cross the English Channel.
In 1973 he was nicknamed “Sir Ronald” because he won nearly every race he entered in the spring of that year. Ron still loves racing , and can be seen occasionally at local races in California where he has been sharing his knowledge and love for the sport with his son Matt who is an up and coming Junior rider.