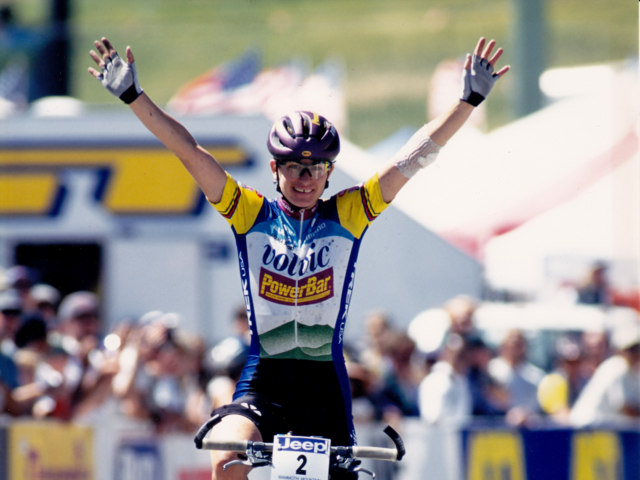 Inducted in 2011 for Mountain Biking

Biography
World Champion, National Champion, Olympian: these are a few of the many titles held by Ruthie Matthes, over her 19-year cycling career. She was born in the outdoor mecca of Sun Valley, Idaho, home of many champion athletes. There, as an energetic 3-year-old, Ruthie watched Jean-Claude Killy win alpine Gold at the 1968 Winter Olympics and confidently announced to her mother that she was going to the Olympics. Eight Summer Games later, she marched with the 2000 US Olympic Team in Sydney, Australia.
Beginning her cycling career on the road in 1983, Ruthie quickly gained respect as a consistent and well-rounded racer. Her winning resume included a hat trick of three National Road Championships in three disciplines (road race, criterium and team time trial) over a two year period, plus a silver medal at the World Road Race Championships.
In 1990 Ruthie would trade her slick tires for knobbies and go on to win the bronze medal at the World Mountain Bike Championships in Durango. Officially switching to mountain biking in 1991, the best was yet to come.
Competing as part of what many consider the best women’s mountain bike field in history, Ruthie was ever-present in a fierce and exciting rivalry that featured Juli Furtado, Susan DeMattei, Paola Pezzo and Alison Sydor. Over an 11-year period, Ruthie rode to the top of mountains and podiums alike, winning virtually every honor possible.
Throughout her extensive career, Ruthie was not only instrumental in raising the awareness and competitive level of women’s cycling, but was also respected as a sponsored athlete. Through collaboration with some of the biggest names in cycling, including the Weight Watchers, Celestial Seasonings, Ritchey, Evian, Volvic-PowerBar and Trek trade teams, Ruthie was keenly aware of her sponsors’ expectations beyond the race course. Her professional attitude, innate friendliness and trademark smile were welcomed elements in highly effective sponsor relations over a period of two decades.
In 2011, Ruthie remains highly involved in the US Cycling Industry as the brand and product liaison for Magura Direct. In this pivotal role, Ruthie travels the world, drawing upon her years of experience as a professional cyclist, providing representation and product development input for Magura, Vaude and uvex. She also serves as a cycling advocate and spokesperson for Focus Bicycles USA, who utilize Ruthie’s considerable expertise and celebrity status to further the cause of bicycle awareness, trail advocacy and the overall cycling experience. 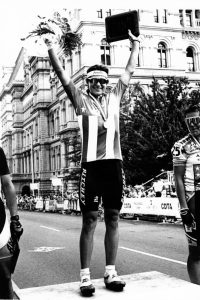