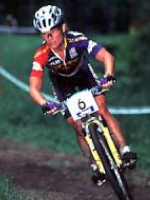 Sara’s passion for the outdoors began as a child of 13 when she visited Colorado from her hometown of Indiana, Pennsylvania. She accepted the challenge to climb three 14,000 foot peaks in one day. Sara headed west once again to attend the University of Colorado, graduating with a degree in Psychology in 1982. She then joined the faculty of Colorado Outward Bound teaching mountaineering courses across Colorado. Sara relocated to Breckenridge, Colorado to join the U.S. Professional Ski Patrol in 1985. During the summer months, she traded her skis for her mountain bike which began a 12 year competitive career in mountain biking.

Sara was a pioneer in women’s mountain bike racing becoming the first American woman to race full time in Europe in 1990. During the next six years, Sara was a National Mountain Bike Team Member winning the titles of World Champion (3 times), and National Champion. In 1992 she was inducted into the Mountain Bike Hall of Fame which is now part of the Marin Museum of Bicycling. After her retirement from full time mountain bike racing in 1996, Sara joined Team Vail’s Adventure Racing team. At the Eco-Challenge in 1998 in Morocco, Team Vail was the first American team to win a major multi-day expedition length adventure race in which teams of four compete. Sara continued her success with a win at the 2001 Gorge Games with Team Beaver Creek and a second Eco-Challenge win with Team Eco-Internet at the 2001 Eco-Challenge, New Zealand.

Her daughter, Emma Lynn Haaland was born in 2000 after Sara turned 40. Sara is a popular Adventure Speaker presenting topics such as “Balance of Life” and “Mental Toughness for Teams”. Sara has been a certified massage therapist, personal trainer and she obtained her nursing degree in 2008.  She is currently working for a western Colorado non-profit that strives to improve rural health care.