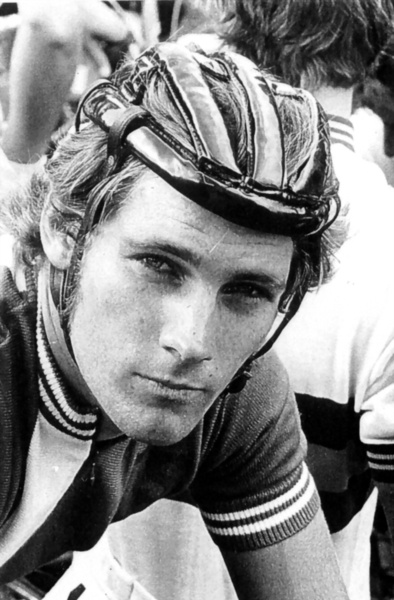 Toby Henderson started his prolific racing career in 1973 at 12 years old at Hollyfield Park in Norwalk, California and Scot Briethaupt’s B.U.M.S. track on a Schwinn Stingray. He turned Pro in late 1978 and his first pro race was at Saddleback Park in early 1979 with one of early BMX’s most formidable team’s, DG. In 1984, Henderson captured the #1 plate as the National Bicycle League’s World Cruiser Champion for SE Racing.

His career and notoriety took off when he became part of the Raleigh Racing team. He raced for Raleigh from 1979 to 1981 and was one of the first racers to promote the sport of BMX worldwide, traveling around the globe with Raleigh doing BMX demonstrations for the masses. A broken collar bone in 1981 ended his season. 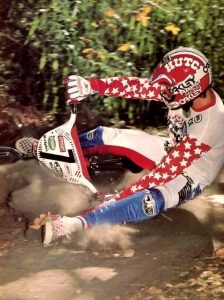 Henderson went on to ride for Hutch BMX and states that, “Hutch was such a powerful program, that one year I flew away from home to 40 weekends of racing and drove to another 10 that same year. The Owners wanted us to be at every event, so they even made me postpone my wedding!”

Early on he was given the nickname “Coca-Cola Cowboy” from BMX Action magazine, however it quickly changed to “Captain Elbows” when he started dominating races in the middle of his Hutch BMX days. He added, “When you’re a gate-filler everyone loves you, but when you win races, you are the most unliked rider among your competition. Funny how that works.”

An early innovator in the dirt jumping genre of BMX, Toby is known for his jumping skills, inventing the “Henderson”, a one handed and one footed jump variation. Toby became a test rider for BMX Action magazine from 1985 to 1987 and raced under their colors as well.

During an unsponsored period, Henderson’s father helped by sponsoring his son. He was seen during this period with “Thanks Dad” on the back of his uniform. In 1987, at 27 years old, Henderson raced his last national race as a serious competitor at the United States Bicycle Motocross Association (USBA) Grandnational in Dallas, Texas on November 11, 1986.

After retiring from BMX racing with literally hundreds of wins, Henderson was the first BMX’er to continue with a professional career in mountain bike racing. He is still involved in BMX while  running “THE” (Toby Henderson Enterprises) a BMX accessory company specializing in helmets and assorted soft goods. www.the-industries.com. He is also the founder of Intense BMX, Speed Bicycles, SINZ and is running these brands today. www.vsiproducts.com