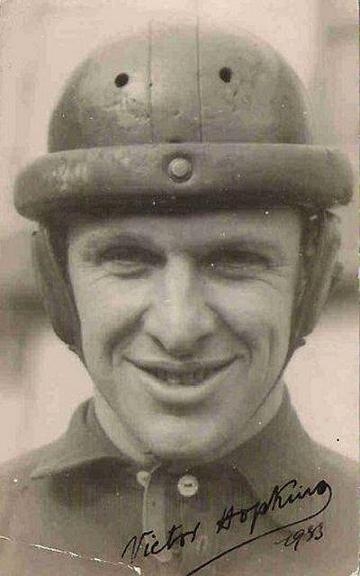 Honors
1926 – National Championship, Track, Stayers, Elite: 1st
Biography
Victor Morice Hopkins bought a bicycle as a newspaper carrier in Davenport, Iowa to reach more customers faster. In the summer of 1921, retired pro cyclist Worthington Mitten spotted the tall, rugged 17-year-old dashing around his route and invited him to join the Davenport Cycle Club. Mitten had founded the club and made racing frames.
Road races flourished in Europe, but American amateur competitions relied on short circuits around parks or downtown streets, competing up to 25 miles. An exception was made for the 1924 Olympic trials. For Midwest cyclists, a 116-mile time trial was held from Milwaukee to Chicago. Hopkins pedaled his one-speed Mitten Special to Milwaukee and lined up for the start in Washington Park. When he finished in Chicago’s Humboldt Park, he scored the second-fastest time. That qualified him for the final in Paterson, N.J. 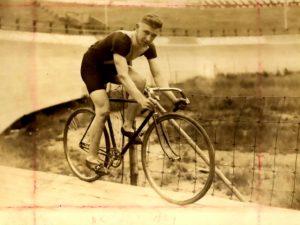 Completely on his own for expenses, he pedaled home to Davenport. Mayor Louis Roddewig caught Olympic fever and donated money for Hopkins to buy food and lodging for his ride three weeks later to the Olympic trials in northern New Jersey. Most of the 1,000 miles to Paterson went over dirt roads and had Hopkins riding up his first hills, the Appalachians. He won the June 1 final qualifier time trial by 20 seconds after more than six hours. He earned a berth to compete in the Paris Olympics individual time trial (massed-start racing was introduced in the 1936 Berlin Olympics).
In the 117-mile Olympics road race on July 23, Hopkins had clocked the third-fastest time through 30 miles when he sped downhill and encountered a railroad crossing gate blocking the road. He swerved into a rut, throwing him to the ground and twisting his rear wheel. By the time he received a new wheel he was out of contention.
Upon returning home, Hopkins received a pro contract to ride in the Chicago six-day, launching his 10-year pro career. He excelled in the immensely popular in track event of motorpacing―pedaling faster than 50 mph behind motorcycles around vélodromes. He was making more than $500 a week, a princely sum. In 1926 he won the national motorpace championship. He won more than 70 motorpace races and received invitations to compete in 1932 and 1933 in France and Germany.
(Courtesy – Peter Joffre Nye)