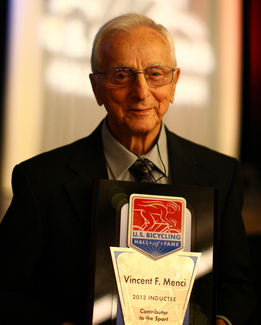 Inducted in 2013 as a Contributor

As curator of the U.S. Bicycling Hall of Fame for its first twenty years, Vince Menci traveled widely to meet men and women who had played leading roles in racing and supporting the sport to collect memorabilia while he hosted events to raise funds for the hall of fame in his hometown of Somerville, New Jersey. Along the way, he may have shaken hands with more national and world cycling champions than anyone.

Born September 12, 1927 in Tuckahoe, New York, he grew up in Somerville, in north-central New Jersey, and graduated from Somerville High. “I wanted to go out for football, but I was five feet six and weighed 143 pounds,” he recalled. Fred “Pop” Kugler, a retired bike racer, operated a bike shop on Main Street. “I used to walk past Pop’s bike shop on my way to school and walking home after school.”

In 1940 at the Amateur Bicycle League of America (predecessor to USA Cycling) nationals in Detroit, Kugler’s son Furman won the men’s championship, daughter Mildred won the women’s championship, and a neighbor, Harry Naismyth, won the junior title (under age seventeen). That year, all of the country’s national champions came from Somerville.

Menci soon took up cycling and began racing. He trained under Pop Kugler and rode with Furman Kugler. Menci rode a custom bike made by frame builder Alvin Drysdale in the era of one-speed track bikes. Menci won the 1947 New Jersey state championship at eighteen. “I raced for eight years,” he said. “I placed in a lot of events, traveling around the country—Chicago, Detroit, St. Louis, all around the Northeast.”

Outbreak of the Korean War in 1950 saw the revival of the military draft. Menci served in the Army as a forward observer on the front lines of combat. Forward Observers with radios and maps directed artillery batteries of eighteen Howitzer cannons each and some twelve miles away to fire on enemy positions. He served five years in the Army and was awarded the Bronze Star Medal with the combat “V” for valor.

After he mustered back into civilian life, Menci worked for the New Jersey Bicycle Association. He and his wife, Dorothy, had two children—Jacqueline (“Jackie”) and Vince Junior.

Menci also worked for new electronic companies and joined CBS television network. He operated the unit that typed crawlers—information running across the bottom of screens during broadcasts. “Every day I worked at CBS I walked in with a big smile. I worked in several dozen states at big football games and tennis tournaments.”

On his own time for many years he served as the state rep granting racing licenses to rider and organized national-level races, including the Atlantic City bike races in the 1970’s, which offered generous merchandise and U.S. bonds. The races included 100-yard sprints on the Atlantic City boardwalk. They drew big crowds and media.

Menci had a cheerful outlook and made friends easily. His races were supported by local politicians and business leaders, who also encouraged media coverage. He sometimes was hard of hearing, which led some observers to note his unique expressions. When he told Tour de France champion Greg LeMond that he wanted to borrow one of LeMond’s yellow jerseys for display on a mannequin over Memorial Day weekend, he promised to return the jersey “ASPCA.”

He took a leading role as curator of the U.S. Bicycling Hall of Fame, established in 1986 in Somerville. In May 1990 the USBHOF opened its doors on Main Street with 1,000 square feet of office space devoted to framed photos, biographical summaries, national and world championship jerseys, scrapbooks, photos, and other memorabilia. Menci also helped procure collections from donors.

Menci continued as curator until the USBHOF moved after 2009 to Davis, California. In 2013 he was inducted into the US Bicycling Hall of Fame as a Contributor in recognition for his broad spectrum of activities that established the organization as upholding the sport’s traditions. Hall of Fame inductee Vincent F. Menci passed away on March 4, 2020 at the age of 92.