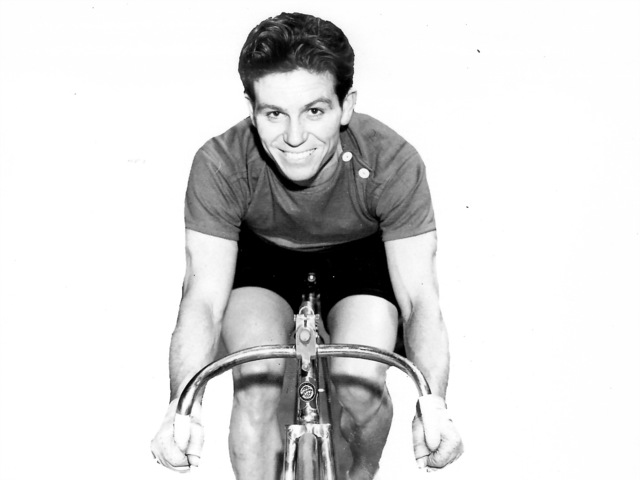 Biography
Six-day racing legend Cecil Yates (now deceased) won 19 six-day events of the 81 he competed in during the 1930s and 1940s. He was a fixture at pre- and post-World War II six-day events in New York’s Madison Square Garden as well as such cities as Chicago, Cleveland and Buffalo. Beyond his 19 victories, he finished either second or third in 26 other races. Born in Thurber, Texas and raised in Chicago, Yates was notorious for finding an opening in a pack of cyclists and careening through at speeds of up to 45 miles-per-hour to seal his victories.
Cecil Yates was an Irish-American six-day racer who lived on the south side of Chicago. He was born in Thurber, TX (just outside of Dallas) on May 18, 1913 1912 [Date corrected by Cecil Yates’ daughter. The 1913 date came from a 6-day program bio]. He went to Chicago as a youngster and soon entered amateur competition, where he won the junior city and state championships. Yates turned professional in 1932. Perhaps his finest victory occurred in the 1939 six-day race in New York’s Madison Square Garden, riding with Cesare Moretti as his partner. This team showed their superiority by gaining two laps in the last hour to win by one lap over one of the strongest fields of riders ever assembled for a New York race. In Yates’ prime, he was regarded as one of the fastest sprinters in the world.
Yates served 34 months with the Army Air Force during WWII. Yates continued competing throughout the 1940s, won a national title in 1948, and retired from racing in 1950 having won 19 six-day races out of 81 he competed in. In addition to his spate of victories, Yates also finished on the podium in 26 other six-day races with ten 2nd place and sixteen 3rd place results.
Yates was also interested in other sports. He played football for Fenger High School in Chicago, and later played semi-pro football. He also participated in auto-racing, and drove cars on the Ascot Speedway in Los Angeles. 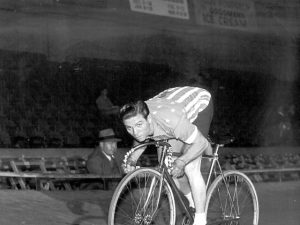