A photo of Taylor offers insights into American cycling in 1901 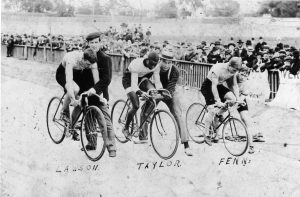 after a campaign that spring as a match sprinter in Paris and other destination cities around the
Continent. He had won forty-two of fifty-seven races he started against national champions on
their home velodromes, including France’s world champion Edmund Jacquelin. Taylor’s early
season earned him more than $10,000 in prize money and appearance fees, worth $310,000
today, greater than any Major League Baseball players, like Ty Cobb, earned that year.
Taylor lined up at the Newark Velodrome in this photo, never published in his lifetime,
between Iver Lawson, a Swedish immigrant and naturalized U.S. citizen living in Chicago, on
the outside, and Willie “Boy Wonder” Fenn, Sr., from Waterbury, Connecticut, on the pole.
They rode scratch, behind a dozen pros ahead on the track, to begin a ten-mile handicap race.
More than 10,000 spectators filled the grandstand and cheap seats. Hundreds more stood on the infield, including Black men in suits and stylish bowler hats joining the rail birds.

Taylor, twenty-two, reigned as America’s national professional sprint champion from the
previous season, based on points awarded in National Cycling Association races of the quarter-
mile, one-third mile, half-mile, and mile. He had won the 1899 world championship in Montreal.
He gained international celebrity when basketball was still spreading like a rising tide
from Northeast college campuses to the South and Midwest. Football drew as much spectator
interest as badminton. Major League Baseball remained racially segregated until Jackie
Robinson joined the Brooklyn Dodgers (today’s LA Dodgers) as a first baseman in 1947.
America was fraught with racial segregation. Although the Fourteenth Amendment to the
U.S. Constitution granted Blacks civil rights and the Fifteenth Amendment granted Black
suffrage, the Confederate States and other jurisdictions deprived Blacks of their civil and voting
rights. Douglas A. Blackmon in his Pulitzer Prize-winning Slavery by Another Name: The Re-
Enslavement of Black Americans from the Civil War to World War II observes: “The Black
population of the United States in 1900 was in the main destitute and illiterate.”

Taylor lived and raced as a trailblazer for Blacks. He endured a lifelong onslaught of
racial harassment, similar to the stresses that Robinson later faced. On a bicycle, Taylor showed
his talent as a world-class sportsman, with chain lightning in his legs, and an astute tactician.
Holding him is his personal trainer, William Buckner, who had accompanied Taylor in his spring
tour and became an athletic trainer for the Chicago White Sox, one of the rare Black athletic
trainers in racially segregated MLB.

Taylor rode an Iver Johnson bicycle, for which he was paid $1,000—now worth $31,000.
Made in Fitchburg, Massachusetts, Iver Johnson frames were equipped with an innovative
adjustable stem and underslung curved top tube, designed make the diamond frame more rigid.

On his right, Iver Lawson rode under contract for Cleveland Bicycles, made in Chicago.
Lawson grew so frustrated from losing NCA national sprint championships to Taylor and then to
Taylor’s nemesis, Frank Kramer, that in 1904 Lawson shipped out on his own across the Atlantic
to the world championships in London. Lawson dethroned defending champion Thorvald
Ellegaard for the world title. Holding Lawson is his older brother, John, known as “The Terrible
Swede” for pedaling over a rider who had fallen in front of him in a six-day race. In the
following winter, John Lawson died of pneumonia.

This photo came from Fenn, a first-year pro at age twenty, after winning the 1900 NCA
national amateur championship. On the start line, Fenn rode a special motor-pace bicycle, with a
standard twenty-eight-inch rear wheel and an eighteen-inch front wheel that lowered his center
of gravity. His bicycle was made by George Pierce in Buffalo, remembered today for his iconic
Pierce Arrow automobiles. Holding Fenn was William Collett, a pro from New Haven.
Fenn’s lower center of gravity may have aided him as he led the pursuit of the
handicappers and won by edging Taylor at the finish line.

For the rest of the season, Taylor gamely competed in NCA championship races but he
couldn’t make up for missing points lost during the spring he spent in Europe. Frank Kramer, a
fellow Hoosier from Evansville who had lost to Taylor in 1900, prevailed to beat Taylor in
points for the 1901 championship.

A week after the photo was taken, Fenn won a five-mile handicap race and set a new
world record: 10 minutes and 33.4 seconds. He settled in Newark. When he retired in 1905, he
operated a corner gas station.

His son, Willie Fenn Jr., succeeded him as the 1924 NCA national amateur sprint
champion, competed that year in the Paris Olympics, and turned professional.

Taylor died in 1932, age fifty-three, the same age as Jackie Robinson, who died in 1972.
Taylor was inducted into the U.S. Bicycling Hall of Fame in 1989, www.usbhof.org.

Peter Joffre Nye is author of the second edition of Hearts of Lions: The History of
American Bicycle Racing (University of Nebraska Press). He serves on the board of the U.S.
Bicycling Hall of Fame.