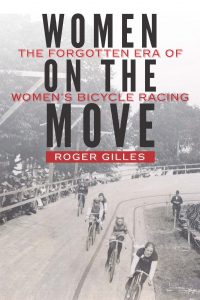 WOMEN ON THE MOVE: The Forgotten Era of Women’s Bicycling Racing
By Roger Gilles. 360 pp. 31 photos. University of Nebraska Press.

American cycling, like art, has evolved through many crucial periods, and Roger Gilles brings back to life when women in the 1890s flew in tight packs around board tracks for cash prizes before as many as 10,000 spectators. These gals provided not only shows of strength, speed, and daring before women had the right to vote. They overcame prevailing Victorian notions of womanly independence, beauty, and strength. They rose above dominant chauvinistic attitudes. They competed aggressively on velodromes from Chicago to New York, from Seattle to Winnipeg, Canada, from Minneapolis to New Orleans and a slew of small towns in between.
Gilles, a writing professor at Grand Valley State University in Grand Rapids, Michigan, has finally brought back to light these long-forgotten heroines. His project was inspired by an artsy framed sepia postcard, circa 1897, adorning a wall in a Grand Rapids pizza café. The postcard featured Tillie Anderson, a Swedish immigrant from Chicago, pedaling a bicycle near an electric trolley on a well-known downtown stretch. The postcard declared, “Fastest bicyclist of her sex.” She was nicknamed The Terrible Swede for the strength she displayed in races.

Anderson was 22, under contact for Thistle Bicycles. She had labored in laundries by day and spent evenings as a seamstress to earn $3 a week. Eventually she purchased her first bicycle. Anderson started as a recreation cyclist when 100-mile centuries came into vogue. Her trainer-boyfriend Phil Sjöberg helped her develop speed and endurance.
It was a time of widespread cultural transformation. Electric light bulbs were replacing oil lamps in homes and businesses. Telephones, typewriters, and elevators were changing the way masses lived, worked, and played. Anderson joined other women taking advantage of recent chain-drive bicycles on diamond frames and pneumatic tires. Suffragette Susan B. Anthony remarked that bicycles “did more to emancipate women than anything else in the world.”

Anderson had blond hair, blue eyes, stood 5 feet 6, and weighed a lean140 pounds. She and rivals raced hundreds of events on steeply banked velodromes built in baseball parks, on fairgrounds, as well as small steep “soup-bowl” tracks in armories, roller rinks, and civic auditoriums. Women battled in a variety of 25-milers up to six-day events, limited to three hours of racing daily; sixes proved so dramatic that customers kept coming back to see more. She won races with $300 paydays—supporting her and Sjöberg in comfort. They planned to marry.

Gilles follows her and four others called the Big Five—Dottie Farnsworth of Minneapolis, who knew how to play to the crowd; Helen “Beauty” Baldwin of New York City; Berliner Lizzie Glaw; and Paris sprint champion Lissette, the nom de vélo of Amélie le Gaul. They generated oceans of newspaper and magazine articles, which boosted box-office sales.

Behind the circuits zigging and zagging for eight years around America and Canada were entrepreneurs. They smelled money and erected board tracks. But church groups, the medical profession, and the League of American Wheelmen forcefully denounced women’s racing.

The LAW threatened to permanently ban any men from participating in an event on the same program as women. By 1900, the LAW despaired so much about women’s racing, the advent of professional men’s cycling, and Sunday racing that the LAW turned all races over to the National Cycling Association, which had no interest in recognizing women racers.

After 1902 Thistle bicycles most of the country’s 300 manufacturers either went bust, merged, or retooled to make automobiles. As a result, prize money vanished. That year, Anderson’s boyfriend Sjöberg died at age 23 from tuberculosis.

Social resistance against the women’s circuit took its toll. Women’s racing in this country languished completely until the Amateur Bicycle League of America (predecessor to USA Cycling), in an effort to lift membership during the Great Depression, introduced the Girls’ national championship in 1937, when Anderson was 52. (The ABLA changed the name to the Women’s National Championship in 1954.)
When Anderson retired from racing she enrolled in a certification program to become a masseuse. She kept four scrap books bulging with accounts from newspapers, magazines, documents, and photos, including the Grand Rapids postcard. She lived to age 90 in and died 1965. In 2000 Anderson was inducted into the U.S. Bicycling Hall of Fame.

Her memorabilia stayed in the family, passed from one generation to the next, and served as a starting point for Gilles’s research. He devoted two years to reading archived newspapers. In Women on the Move, Roger Gilles rescues a dynamic sports era. Anderson and her sisters in speed competed in front of crowds, created press attention, and received fistfuls of money.