The Passing of Ernie Seubert 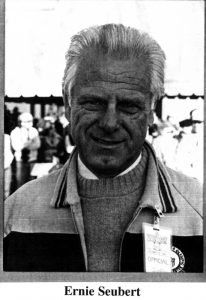 1994 Inductee and long-time USBHOF Board of Directors member Ernie Seubert passed away on February 13, 2021 at the age of 91.

As a competitor Seubert raced in the Junior and Senior Nationals, was the New York state champion and won the 1952 Tour of Somerville.

Following his racing career, Seubert organized and helped produce various junior and masters national road championships. He served as the Chief de Mission for the 1992 Olympic Games of Barcelona.

After serving in a variety of positions over the years, Seubert was awarded a life membership on the US Cycling Federation Board of Directors in 1991.  He was inducted to the U.S. Bicycling Hall of Fame in the Contributor category in 1994.

Seubert was a passionate supporter of the U.S. Bicycling Hall of Fame from its inception in Somerville, N.J. in 1986 and continuing through its move to Davis, CA in 2010. He was a long-time member of the USBHOF Board of Directors and served many important committees including the Nominations & Selection Committee with which he was active until his passing. 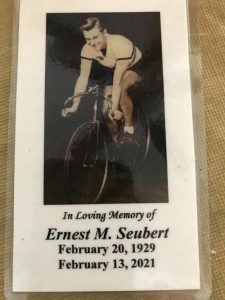 A more complete biography for Seubert can be found here

Donations in Seubert’s memory can be made by visiting the U.S. Bicycling Hall of Fame web site at: www.usbhof.org and click on “Shop” and then “Donations” or by clicking on: Seubert Memorial Donations

All contributions will be used by the U.S. Bicycling Hall of Fame to preserve the history of American cycling and recognize significant cyclists and contributors. For specific donation requests, please contact Bob Bowen, USBHOF President at: bbowen@usbhof.org