The U.S. Bicycling Hall of Fame will induct three legends of American cycling and celebrate a fourth in ceremonies being held on November 2 in Davis, California.  The honorees represent several disciplines within the sport of cycling. The inductees are Karen Bliss (Modern Road & Track Competitor), George Banker (Veteran Road & Track Competitor), and Sean Petty (Contributor to the Sport).  With the Class of 2019, there are now 161 Inductees in the U.S. Bicycling Hall of Fame.

The Induction ceremony features a keynote speech by Washington Post reporter Michael Kranish, author of the recently published “The World’s Fastest Man: The Extraordinary Life of Cyclist Major Taylor, America’s First Black Sports Hero”.  Taylor was inducted into the Hall of Fame in 1989.

“The U.S. Bicycling Hall of Fame is proud to honor these individuals,” stated the USBHOF Nominations & Selection Committee.  “These individuals were selected by the voters because of their supreme accomplishments in the sport of cycling. Their induction into the Hall of Fame will serve as a perpetual reminder of their dedication and sacrifice to the sport.”

Induction weekend will take place November 1st and 2nd in Davis and features a celebration of American cycling. The public is welcomed to join Bicycling Hall of Fame members, cycling industry leaders and cycling enthusiasts for a free Club Ride on Saturday, Nov. 2; and the 33rd annual induction ceremony that evening. Tickets for the Nov. 2 Induction Ceremony at the UC Davis ARC facility are $60.00 each and  are available for purchase online at: https://squareup.com/market/us-bicycling-hall-of-fame.  For more information, visit: www.usbhof.org

The Hall of Fame has been located in Davis, Calif. since 2010 and boasts 8,000 square feet of displays and exhibits that tell the story of American cycling history via inductee memorabilia and a collection of bicycles from the 19th and 20th centuries.

The Class of 2019 Inductees include: 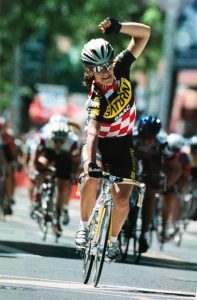 Karen Bliss – Modern Road and Track:   Karen Bliss began racing for Penn State University’s cycling club in 1983. After graduation in 1985, she joined other aspiring bike racers at the Olympic Training Center in Colorado Springs. She raced full-time while collecting her master’s degree from the University of Florida until retirement in 1998. Bliss averaged 100 race days per year and, due to her strong sprinting ability, collected more than 300 career wins on the road and track.  She competed in the World Championships five times and was on the U.S. National Team from 1987-1998. Bliss raced all over the U.S. and Europe as well as in Australia, New Zealand, Brazil, Canada and Japan.

Bliss was a seven-time National Champion, three times in Criterium Racing and four times in Track Points Racing. Karen also had great success as a road racer in stage races. Karen was the 1997 USA Cycling’s “Road Cyclist of the Year” and she was named the “Winningest Cyclist in North America” by Velonews.  She also served as the representative for athletes on the USCF/USA Cycling board from 1996-2000.

After retiring, Bliss stayed involved in cycling as a sport director, a public relations coordinator, and a sponsorship manager. She worked at Bicycling Magazine and spent 15 years at her original sponsor, Fuji Bicycles, where she became president of the company. Karen Bliss image courtesy of Karen Bliss:  “Win at Tour of Somerville 1998” 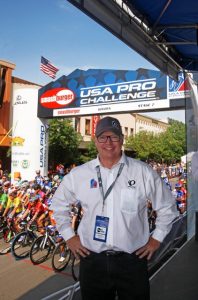 Sean Petty – Contributor:   Sean Petty has promoted and managed cycling programs at the highest levels in the United States and internationally for over 34 years. From 1985-1990 he managed the 7-Eleven cycling sponsorships for men, women and juniors road and track teams including the first U.S. pro men’s team in the Tour de France; a national road series; a national track series and 7-Eleven’s sponsorship of the 1986 UCI World Championships.  From 1994 to 2014 Sean managed an array of programs as a team leader in various capacities with USA Cycling including support of the 2000 Olympic games, 18 World Championships, sponsorships, communications and memberships. He ended his 20-year employment at USA Cycling as the Chief Operating Officer.

Petty now serves as a volunteer board member for several cycling organizations including USA Cycling, Union Cycliste Internationale (UCI) and Bicycle Colorado. He is the only UCI Road Commission member from outside of Europe. A strong advocate for women’s cycling, Petty served as the race director for the USA Pro Challenge women’s race (2015) and the women’s Colorado Classic (2017-2019). Sean Petty image courtesy of John Pierce of Photosport International 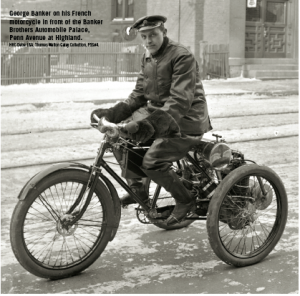 George A. Banker – Veteran Road and Track : After Baker and his brothers grew up in Pittsburgh, he left in 1894 to join a group of ambitious riders sailing to Paris as the vanguard of professionals competing for cash on tracks, far from America where the governing body opposed pros for “sullying” the sport. Baker turned twenty-one and won the inaugural Grand Prix de Paris match-sprint contest. He won $1,000—worth about $28,000 today. For the next six years he raced abroad, a star among the biggest names of his generation.

At the first World’s professional sprint championship in 1895 in Cologne, Germany, Banker won, but officials threw the race out and ran it again the next month and he finished second. He finally triumphed at the 1898 World’s sprint championship in Vienna, Austria. Banker won about 80 grand prix races in cities around France, Belgium, Germany, Italy, Spain, Algiers, and Morocco. Banker is recognized as America’s first world professional champion sprinter and the first American to win two world championship medals.  In 1900 he returned to Pittsburgh and opened one of the city’s first automobile dealerships. George Banker image courtesy of the Heinz History Center