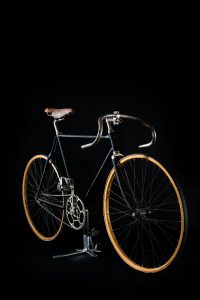 Major Taylor’s historic bicycle is on its way to his hometown, Indianapolis for 2022. The Indiana State Museum is borrowing a Peugeot that Taylor raced on during his popular 1903 campaign in Paris and around the Continent. The track-racing bicycle, on loan from the U.S. Bicycling Hall of Fame in Davis, Calif, is the only known bicycle owned and raced by the pioneering cyclist and world champion Marshall “Major” Taylor (1878-1932).
The bicycle will be a crucial component of the exhibit, “Major Taylor: Fastest Cyclist in the World” to run at the Indiana State Museum from March 5 to October 23, 2022. The downtown Indianapolis museum is close to where Taylor grew up, rode bikes, and worked in bike shops during the bicycle boom of the late 1890’s. 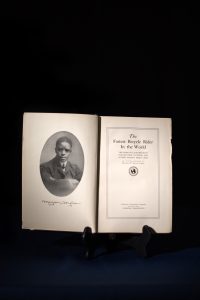 The Taylor bicycle, a Peugeot brand single gear track racing bicycle with steel frame and wooden wheel rims, is part of the USBHOF permanent collection and is owned by the U.S. Bicycling Hall of Fame. The bicycle is typical of an era when bicycle riders remained seated at alltimes during races. The bike’s chainring has 28 one-inch-teeth spaced out on the front chainring and just nine on the rear cog—sprinter’s gearing, equivalent to today’s 56 X 18 combination.

Taylor won the 1899 world professional sprint championship in Montreal and the American title that year and defended his American crown in 1900 for his third consecutive national title. Heearned his nickname “Major” as a youth in Indianapolis while performing bicycle tricks outside shop while wearing a military-style jacket. Taylor would move to Worcester, Mass., and become known as the “Worcester Whirlwind”

Taylor’s bike was originally donated to the U.S. Bicycling Hall of Fame in the 1990’s by Joe Côté of Worcester. Côté, who raced bicycles in New England in the 1930s, acquired a collection of Taylor’s bicycles and rode them in July Fourth Parades, telling anyone interested about Taylor’s
legendary exploits. The Taylor bike has been one of the Hall of Fame’s most popular displays at its location in Davis, California.

The exhibit at the Indiana State Museum is part of a broader effort in Taylor’s home state to increase recognition of Taylor’s achievements. The Major Taylor Coalition of Indianapolis, whichhelped spearhead a new downtown Indianapolis mural of Taylor, also assisted in making this museum loan possible.

“Major Taylor is a giant of Indiana history. This exhibit provides a rare opportunity for Hoosiers to learn about his life and career. To see a bicycle that he actually raced helps his history come alive,” said Daniel Lee, U.S. Bicycle Hall of Fame Board Member and, with Tandy, a member of the Major Taylor Coalition of Indianapolis.